Implement recycle in any script 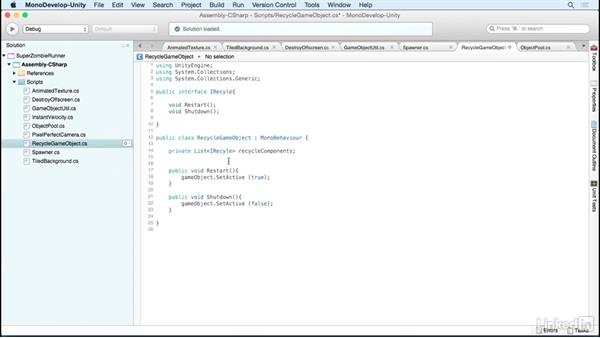 In this video, Jesse Freeman teaches you how to create a more generic approach to implementing object pooling in Unity by creating a recycle GameObject script that can be applied to any GameObject in Unity. Learning how to create a reusable object pool system in Unity 5 is an important skill for building a 2D game.

- [Voiceover] Now our object pool system is working…really well, and we can simply attach…a recycled game object script…to any game object we want to add to the pool.…But what happens in other scripts…when we restart a game object that's being recycled?…Right now there's no way to actually call Restart…or Shut Down on other scripts.…In order to do that, we're gonna modify the way…that our recycled script works to look for other scripts…that it'll need to reset whenever it gets reset itself.…

Let's open up the recycled game object script.…Now, one of the ways that we can actually implement this…is by using something called the interface.…An interface is like a type of contract…that ensures that a class that uses it will always…have the same type of public methods.…Here above our recycled game object…we're gonna create a new public interface…and we're gonna call this interface IRecycle.…The two methods that we use inside of our recycled…game object script are Restart and Shutdown.…

So let's put them into our IRecycled interface.…

Video: Implement recycle in any script