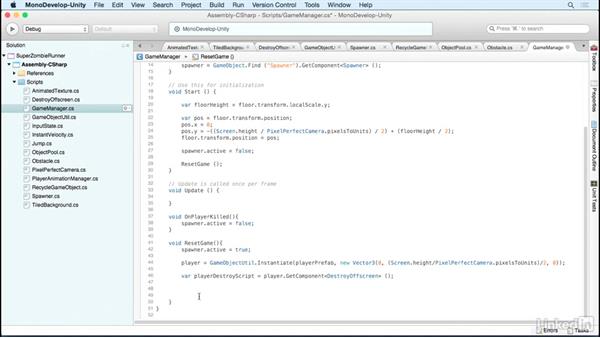 In this video, Jesse Freeman teaches you how to end your endless runner game. When the player dies by getting pushed off the screen, you'll need a way to stop the game and then let the player quickly restart when they are ready to go again. Learning how build a game loop in Unity 5 is an import skills for building a 2D game.

- [Voiceover] Now it's time for us to connect up the logic…that'll let us know when the game is over.…We're gonna be using when the player dies…as this trigger event.…Now, in order to do this,…we're gonna need a way for the game to be able to tell…when the player has actually died.…One way is to use a delegate.…To illustrate how this works,…let's open up the DestroyOffscreen script.…At the top of our script,…let's add two new public properties.…

The first is gonna be a public delegate…with a return type of void called OnDestroy.…Next is going to be the actual event that we'll map this to…called public event.…We'll type it to our OnDestroy method above…and we'll call this DestroyCallback.…One of the easiest ways to think of what a delegate is…is by connecting one property to another method…so that when we call the property,…we'll, in essence, be calling another method.…

It will allow us to make connections…from one script to another.…Now, just hearing that doesn't make it very easy to grasp,…so let's take a look at how we can actually use this.…