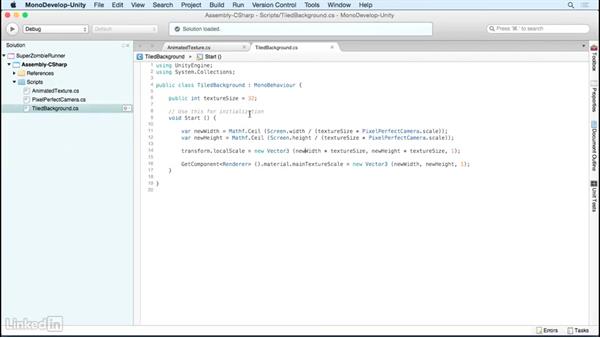 In this video, Jesse Freeman teaches you how to create a fake parallax scrolling effect. To do this we'll scroll the background texture a little slower than the foreground to give the impression of distance between the two layers. Working with repeating textures, quads and GameObject's dimensions in Unity 5 are important skills for building a 2D game.

- [Voiceover] Now we're ready to build the floor…for our game.…We're gonna use a similar technique…to what we did for the background.…But before we move on, let's select a background…and remove the mesh collider.…This is part of Unity's 3D physics engine…and we're not gonna be using it.…Simply click on the gear and remove the component.…Next let's create a new quad…and we're gonna call this, foreground.…While we're in here let's remove the mesh collider,…let's set its X position to zero,…and we're gonna change its scale to 64 by 64…since we'll be using a larger texture.…

We can also move this down just a little bit…so it's not covering up our background.…Next, we'll need to create a new material.…Let's go into our materials folder…and create a new material called…floor texture.…Again, we'll change the shade or type to mobile,…particles, alpha blended, and we'll need to make sure…that the new floor texture is repeatable.…Let's go back into our textures folder…and take a look at the floor texture.…

Now, previously we turned this into a texture,…