Control the text with code 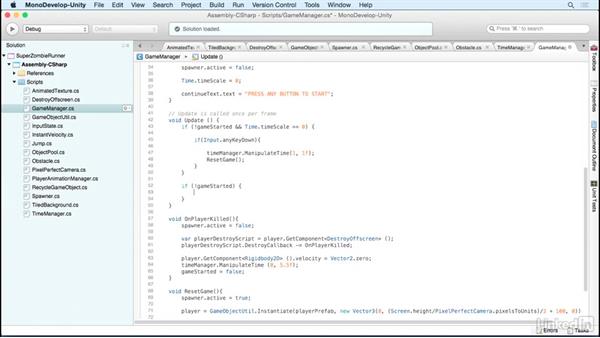 In this video, Jesse Freeman teaches you how to display the text in your game. You'll learn how to display a simple timer that lets the player know how much time has taken place while they are in a game session. This is the basic foundation for score keeping in the endless runner game. You'll use this as the basis for adding a high score later on. Learning how to polish a Unity 5 game is an import skills for building a 2D game.

- [Voiceover] Now that we have our blank text in place…lets make it a little bit more eye catching to the player…by making it blink.…To do this we're gonna go into our game manager class.…Inside of the game manager we're gonna need…to import the new UI components.…Let's time out using unity engine UI.…Now we'll be able to reference the text field…that we created on the scene.…Let's create a new public property…typed to text and we'll call this continue text.…

Next we'll make two private properties.…One will be to manage the blink time…and the other whether it needs to blink or not.…Now lets go back into our game.…We'll select our text field…and we'll copy out the text that we have in it.…We'll be pasting this back into that class in one second.…The other thing that we wanna do…is select the game manager and drag the reference…of our text field over to where we have…the continue text property field.…

Video: Control the text with code