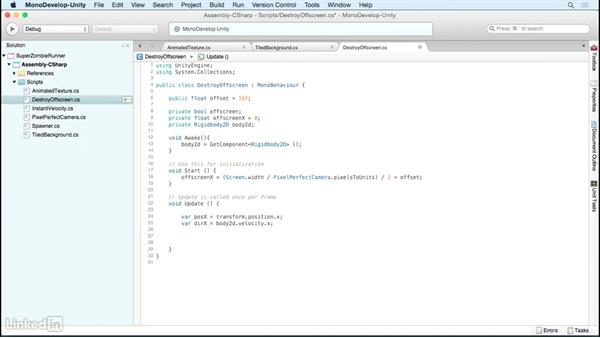 In this video, Jesse Freeman teaches you how to destroy GameObject prefabs that move outside of the screen's visible area. This will help later on with memory management so you don't waste resources on running GameObjects the player can't see. Learning how work with GameObjects in Unity 5 is an important skill for building a 2D game.

- [Voiceover] So now that we have our spawner working,…let's look into how we can actually destroy objects…that go offscreen.…If you noticed before when we ran our game,…the objects will just continue.…Once they go offscreen,…they're still taking up memory…even though they're not being rendered.…So to make this more efficient,…let's go into our scripts folder.…We're going to create a new script…and we're going to call this destroy offscreen.…Then let's open this up in Mono Develop.…Let's add a few public properties to this…in order to keep track of one…when the object is off the screen…and two when it should actually be deleted.…

To get started, we'll make a public float…called offset, and we'll set this to 16.…This will represent the value of how far off of the screen…it needs to be before it gets destroyed.…Next up we'll create a private bullion for offscreen.…We'll use this as a flag to know that the object…actually is offscreen and needs to be destroyed.…Next, we're going to create a private float…for the offscreen X value.…