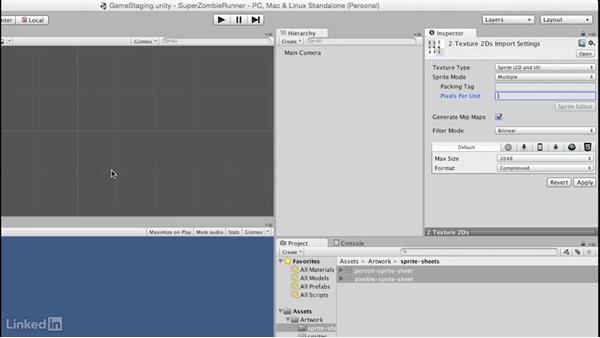 In this video, Jesse Freeman teaches you how to cut up sprites from sprite sheet texture in Unity. He'll cover the basics of Unity 5's sprite editor, how to cut out sprites by defining their width and height in a grid and what to do with them once they are cut up. Working with artwork such as sprites in Unity 5 in an import skill for building a 2D game.

- [Voiceover] So now that we have our project set up…and we've imported all of our artwork,…let's talk about how Unity works with textures.…Since we set this project up to be…in 2D mode Unity is automatically…gonna import all of or artwork as sprites.…If we go into the sprites folder…and click on the first item, chair,…you'll see that there's a preview of the actual sprite…and we have all of its properties and settings.…We're gonna go into this in a little bit more.…One way to think of a sprite is just…an individual image that'll be displayed on the screen.…

When it comes to sprite sheets,…these are collections of sprites…that are put together into a single texture.…This is a good way to save memory…and also it allows us to organize…sprites together in a way that'll later…let us cut 'em up into individual artwork assets.…And then finally we have textures.…In it we have artwork that's automatically…been converted to sprites.…Now later on we're gonna convert these into textures…so that we can use them to repeat on surfaces…