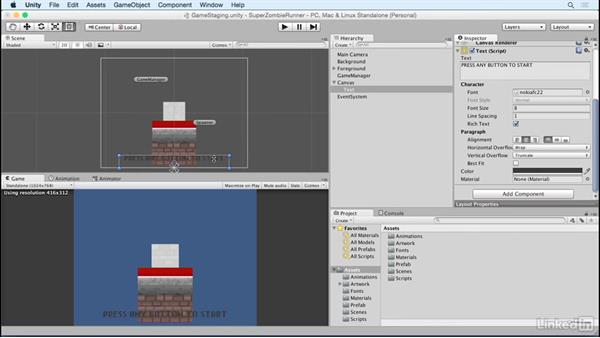 In this video, Jesse Freeman teaches you how to control Unity 5’s new text component via C#. This will allow you to dynamically change the value of the text component at runtime directly from code. Once connected, you can change the value at any time. Learning how to polish a Unity 5 game is an import skills for building a 2D game.

- [Voiceover] Now that we've cleaned up…the way that fonts render in our game,…now let's go through and clean up…what the text is going to say…and how it lays out on the screen.…Let's open the Canvas and select the Text element.…One thing you'll notice, though,…is that the text is rendering behind our artwork.…We can actually fix that by going into the Canvas…and changing the order in layer.…Let's give this a high value, like 100,…and now the text will appear…above the other artwork in our game.…Going back into the text instance,…let's change the font size to eight.…

We'll want to change the value of the text…to say, "Press any button to start."…Now, if we zoom out, you'll now see…that the text sits inside of the size…of the text area we originally created.…What we're going to want to do is now center it…within this space.…Let's go to the Paragraph Alignment button, and hit Center.…Now, our position is set to 00,…which will roughly center this inside of our canvas.…You'll see that the pivot position of this object…