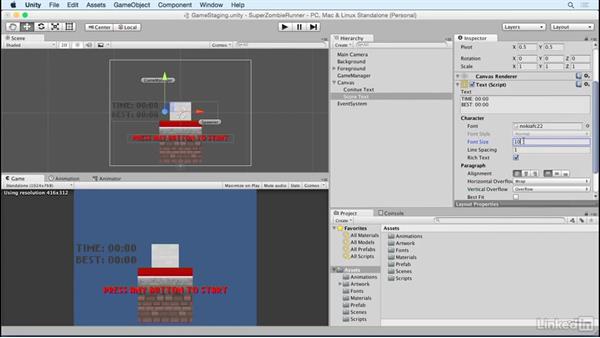 In this video, Jesse Freeman teaches you how to connect your new text components to the game manager so the game can properly display stats to the player. This allows you to have the game manager also manage any UI text being displayed to the player at the start, during and end of a game. Learning how to polish a Unity 5 game is an import skills for building a 2D game.

- [Voiceover] Now that we have the continue text done…it's time for us to move over…to the text that'll hold our score…and high score.…We're gonna keep track of the time…that the player stays alive.…We'll have the best time as well…and that'll be our high score.…Let's create a new text object…and we'll see that it's starting…to get a little crowded here…so lets name the first text object…continue text and we'll name this new one score text.…

Next we'll wanna setup the score text to look like…how our high scores will eventually be…when we're rendering it out from the code.…First let's add the words time…and setup a basic time…and then next we'll do best…and we'll setup another time value as well.…Here you'll see that since the text is expanding out…past the size of the actual text field…it's being cut off.…Now this won't be a problem in a minute…because we're going to actually lower the font size…and change the font in general…but if you run into problems in your own game…you can change the horizontal overflow…and the vertical overflow.…