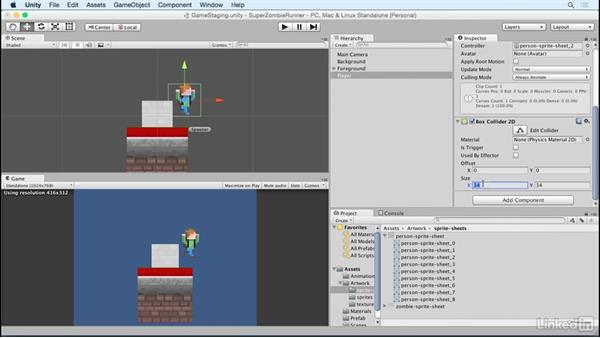 In this video, Jesse Freeman teaches you how to build a simple player for your game. You'll learn how to create a player prefab as well as how to attack basic physics logic to the player in your Unity scene. Learning how build a player GameObject in Unity 5 is an import skills for building a 2D game.

- [Voiceover] Now that we have our levels set up,…our spawner working, and the object pool working as well,…it's time for us to create a player for our game.…To do this, we're gonna set up…the animation for our player first.…Let's go into our Artwork folder and go…to our Sprite sheets and select a person.…Here we can unfold the texture and see all the sprites…that we cut out from the sprite sheet.…Let's drag sprites two through eight onto the scene.…Once we do this, Unity is gonna want us…to create a new animation for all of these sprites.…

In this case, let's call this PlayerRunAnimation,…and we're gonna open this up and create…a new folder now for all of our animation.…Then let's save the PlayerRunAnimation…into the Animations folder.…Now if we run our game, we'll see that our player…has his run animation in place.…Next we'll want to clean this up.…Let's rename this to Player,…and next we're gonna want to add…the physics objects we need to make this work.…