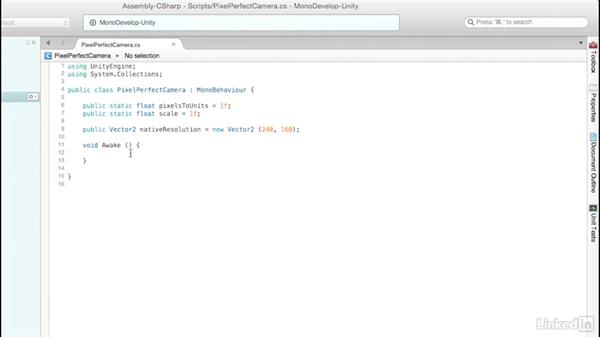 In this video, Jesse Freeman teaches you how to create a simple pixel perfect camera to display pixel art correctly. You'll design the camera around the native resolution of your game then calculate the scale at which to increase the camera's size based on the actual screen size. Working with the camera in Unity 5 in an import skill for building a 2D game.

- So in the previous video,…in order for us to see our artwork,…we had to change the main camera scale.…By default, it was set to 5.…Now, if we were to move something closer to the camera,…you'll see that it's incredibly large,…and again, remember,…this is because all of our artwork…is a one-for-one ratio…to units in Unity.…So each one of these units…is now a pixel.…Well, at different resolutions on different devices,…we're not going to be able to maintain…a consistent look and feel.…

What you'll see is that we have classes…