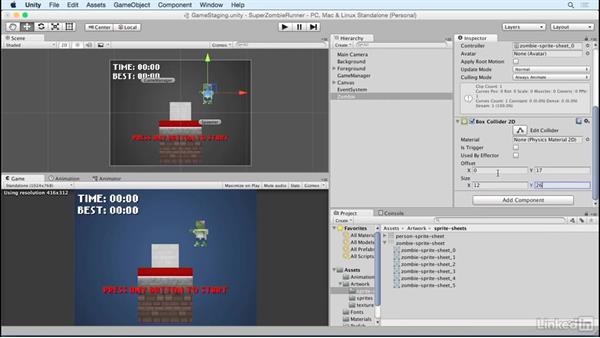 In this video, Jesse Freeman teaches you how to Zombies that move faster than static obstacles in the game as an added challenge for the player. The Zombies will be built off of the same basic logic of the obstacles but also contain animation. Learning how add more obstacles to your Unity 5 game is an import skills for building a 2D game.

- [Voiceover] So now we have a fully functional game.…The only thing missing are more objects and obstacles…for the player to avoid,…especially zombies,…considering we named this Super Zombie Runner.…So now, to illustrate how scalable this system is,…we're going to quickly create a zombie,…add it to the spawner,…and show how easy it is to create new obstacles…for the player to avoid.…To get started, let's go into the artwork folder…and go into the sprite sheets.…Here, we're gonna select our zombie sprite sheets.…

Now, before we can use this,…we're gonna have to make one minor adjustment.…Let's go into the sprite editor.…And you'll see, when we originally cut out our zombies,…they have a center pivot point.…What we wanna do is change the pivot point…on all of these to bottom.…Once you're done,…hit apply, and let's close this window.…Now, we can drag all the artwork into the scene,…and create our animation.…Here, we'll call this Zombie animation.…

And let's make sure that we save this…inside of our animations folder.…