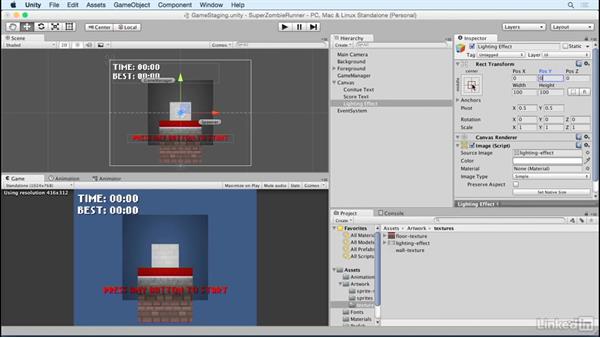 In this video, Jesse Freeman teaches you how to work with the new text component that’s part of Unity 5’s UI system. You’ll learn how to create a font, convert it into an editable font, create a text instance and add it to the scene. Learning how to polish a Unity 5 game is an import skills for building a 2D game.

- [Voiceover] Now everything in our game…is finally up and running.…We have our scores, we have our players,…we actually have a full game, but something is missing.…For me, the game just looks a little bit flat.…Now a lot of the times I like adding…subtle little lighting effects to give the game…a little bit more atmosphere,…and while it's possible to use real lighting…inside of Unity, I want to show you…a neat trick that's actually gonna let us…fake lighting and we'll still take advantage…of some of the unique features…that the new UI system provides us.…

To get started, let's go into our Artwork folder…and go into textures.…Here you'll see we have a lighting effect texture.…Now, this is a texture that's designed…to stretch across the entire screen,…and it's transparent in the middle,…with a gradient going out to black.…Now it's very subtle, and it's designed…to give us a vignette effect across the artwork.…Let's configure this so that it's ready…for us to use in the game.…Here, we're gonna set the Pixels to Units to 1.…