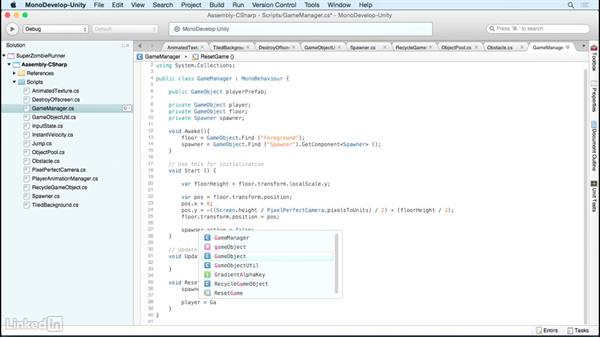 In this video, Jesse Freeman teaches you how to dynamically add the player to the endless runner game loop. You'll use the object pool to instantiate a new instance of the player. This will be important starting and restarting the game. Learning how build a game loop in Unity 5 is an import skills for building a 2D game.

- [Voiceover] Now that we have the basics…of our Game Manager in place,…let's look into how we can set up our game.…We're gonna create a method called ResetGame…that'll get called whenever we wanna create a new game.…In this case, it's simply gonna turn the spawner on…and we're gonna get a reference to the player,…either from the object pool,…or have the object pool create a new player for us.…First, let's select the player instance in the scene…and select Apply to its prefab…to make sure that any changes we've made…are now saved to the prefab.…

Then we're gonna delete it from the scene.…Next, let's select the Game Manager…and double-click on the Game Manager script…to open it up in MonoDevelop.…At this point, we now know that the floor…and the spawner are going to work…by getting our own reference during the Awake method.…So let's make these two properties private…so we don't see them in the Inspector.…Above this, we're gonna need a reference…to the playerPrefab so we can actually create it…when we reset our game.…