Add in a player idle animation 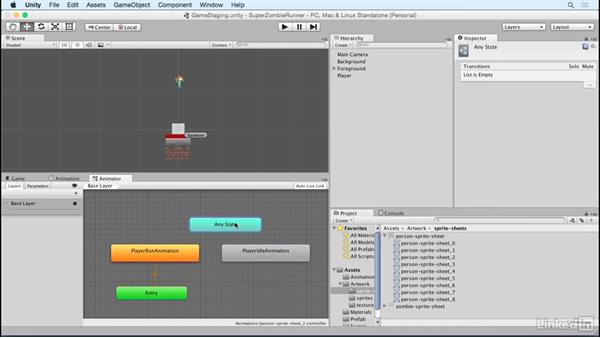 In this video, Jesse Freeman teaches you how to add idle animations to your player to show different animation states based on when the player is standing still. You'll learn the basics of working with animated sprites in Unity. Learning how build a player GameObject in Unity 5 is an import skills for building a 2D game.

- [Voiceover] Now we're ready to add…a new animation to our player.…In order to do this, we're gonna open up…two new windows so that we can set this up.…Let's go to the Window menu and open up the animator…and also the Animation panel.…I'm gonna drag these down here to the game…so that we can test out what we're doing in our scene…and still look at the animations.…Now, in order for this panel to get populated,…we're gonna need to select a game object…that has an animator…and a sprite renderer attached to it.…

Here, you'll see that, after selecting Player,…our Animator panel now has each of our animation states.…The one we've created so far is PlayerRunAnimation.…Entry is the point into this animation state machine,…and Any State is a way for us to transition…between one state to another no matter where we come from.…Now, we could drag the animation…of the player standing back into the scene,…but then we'd have to go and drag its animator…into this window when we can actually do this…all in one simple step.…

Making sure the player is still selected,…