Add a game over effect 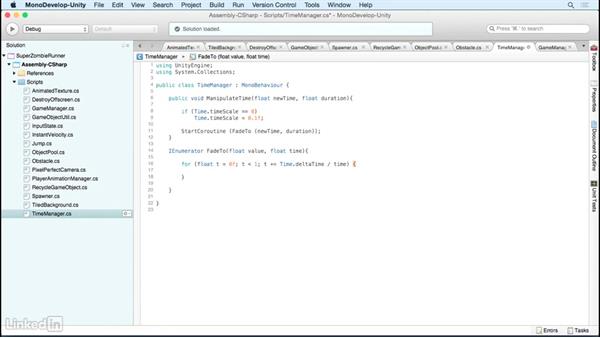 In this video, Jesse Freeman teaches you how to add a simple game over effect to your endless runner game. You'll work with Unity's time class to slow down time and give the player a chance to realize what si going on before you let them restart the game. Learning how build a game loop in Unity 5 is an import skills for building a 2D game.

- [Voiceover] So now at this point,…when our player dies, we do turn off the spawner,…but everything else just seems to keep moving.…So one of the things that we want to do…is make everything stop.…Now, we can go through all the objects in the game…and either stop their velocity,…or in the cases of the background textures,…we can tell them to stop scrolling,…but that's a lot of work.…One of the easiest ways we can do this…is to actually manipulate time…and just tell the time scale to go to zero.…

That, in essence, would pause our game.…So as soon as the player dies, we'll pause our game.…Then, we can restart it by resetting time…back to its default value of one.…So let's take a look at how we can implement…a very basic time manager into our game.…Let's go into the scripts folder…and create a new C# script called TimeManager.…Let's open up the TimeManager in MonoDevelop,…and let's start adding in the logic we're gonna need.…

Video: Add a game over effect