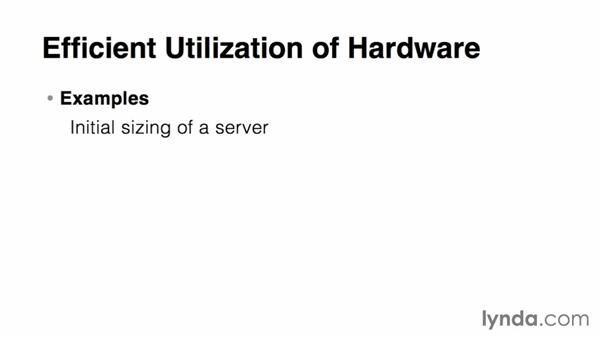 Join Martin Guidry for an in-depth discussion in this video Using virtualization for more efficient utilization of hardware, part of Learning Virtualization.

In this section, I'd like to talk about one of the advantages of virtualization and that's the efficient utilization of hardware. Simply put, virtualization should allow us to use the resources we need, no more, no less. This will hopefully help us avoid the situation where a server is significantly under-powered or over-powered. Almost all of the hypervisor tools currently available on the market will allow us to easily re-size a virtual machine manually.

So this would be a manual process performed by an administrator where we increase or decrease the number of processors, the amount of RAM, or the number or size of hard drives. Some of the more advanced hypervisors on the market will do some of this for you automatically. So the hypervisor will continuously monitor a virtual machine, when that virtual machine begins to get short on a certain resource, a hyper visor will provide additional resources.

And also if a virtual machine has an excessive amount of resources, the hyperviser can adjust the resources to the proper level. Some examples of times when you might want to increase or decrease the amount of resources available to a virtual machine. And what happens with the initial sizing of a server. So when we first determine that we have a need for a new server, whether it be for a virtual server or a physical server, we'll need to make some estimates of how much ram processor and disk this server needs.

Sometimes we aren't 100% accurate with these estimates. And once we build and start running the server, we find that we actually need significantly more or significantly less of a certain resource. If you had built out a physical server. At this point it can be fairly difficult to change the amount of resources. Adding new resources would be an additional cost, removing resources can also be difficult. It's unlikely we would be able to recover the money we spent on the resource in the first place.

However, with a virtual machine. It's fairly easy to add and remove resources. And therefore the initial sizing of a server isn't quite as important. It's no longer vital that we get this exactly right the first time. We now have a margin of error where can go back and change things after the initial sizing. There are also some business cases where you will have a temporary change in the need for resources. So for example, if you are an e-commerce site doing a lot of sales online you probably have a certain workload during most of the year and then a significant increase in workload around the Christmas buying season in late November and December.

You may need to handle five or 10 times more traffic than you normally do. And obviously that's going to require more resources in your server. Again, with a physical server, it might be extremely difficult to increase the number of processors or RAM significantly. But with a virtual machine it can be quite easy. When we resize a virtual machine, this will have some impact to the guest operating system. Some older operating systems have trouble with increasing or decreasing the amount of memory or processor.

In particular, processor was a problem in some of the Legacy versions of Windows. So for example, Windows XP and Windows 2003 would have problems if you went from a single processor to multiple processors. If you already had multiple processors, you actually could change the number. You could go from 2 to 4 or vice versa. But going from single to multiple, or going from multiple to single would cause problems. This is actually no longer a problem in modern operating systems. 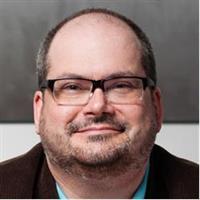 5/29/2014
Virtualization is a vastly important topic to IT managers. It allows one computer to run multiple operating systems, leading to a more efficient use of hardware resources. In this course Martin Guidry explores the crucial concepts behind today's virtualization tech, its pros and cons, common uses, and hardware requirements. He dedicates two chapters to Microsoft Hyper-V and VMware Workstation, two of the most popular hypervisors, and then shows how to prep your existing infrastructure to accommodate virtualization. Before you leave, make sure to watch the tutorials on troubleshooting and backing up your virtual machines, so you can fix problems and recover your work in case of a system failure.
Topics include: