Creating an emitter and shaping the particles 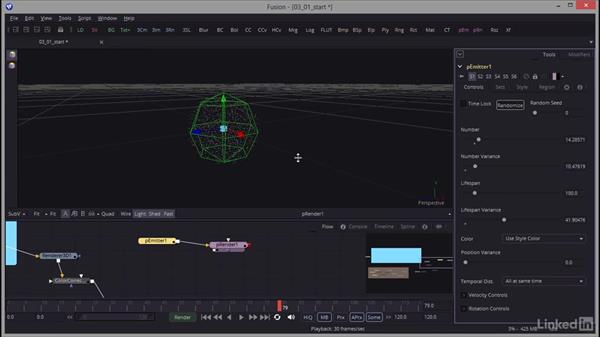 - [Instructor] Particles are a terrific way to add some life to motion graphics here in Fusion. We've got a robust particle system and we can integrate them nicely in our 3D or render them and slip them into the 2D. I'll start by creating a particle emitter. Right now, I don't have anything showing in the flow but I can show what's going on by picking the merge of my last node and pressing one. I'll make some particles then off to the side here in the flow. I'll pan over a bit, right click, and make particles, pulling up this dividing line just a bit for more real estate to work with.

I'll right click and choose Add Tool and down here we can see that particles have their own grouping. Under particles, I'll make an emitter choosing pEmitter. We can also see we've got a lot of things to play with, avoiding bouncing, flocking, gravity, and so on. I'll make an emitter and I need to have a render in here so I can see what's happening. Right now if we press one, we don't see anything. We can fit them in but it doesn't help. It's still laying over our existing composition. What I'll do then is to right click and add another tool, choosing again Particles and pRender Then I'll connect them, the emitter into the render, pick the render and hit one and there's my particle system.

The difference is that this is a 3d object so we can integrate it in. But we have to have a way to see it in here to show those particles. If you haven't played too much with particles, it's pretty straightforward. We can direct the herd but not the heroes. It matters what's happening to the general crowd and those are the kind of behaviors we can effect. We can't take a particle and do something specific with it. Control then starts with our emitter. Where are the particles born and what's their initial look and behavior, and note that I said initial. What we'll do here with particles then is to set up that emitter to emit essentially a large static cloud.

Now obviously we can have these flow particles do, well, zoom around if we need. Right now, they emit in that sphere and their velocity is zero. Their number is ten and there's no number variance. Even number. What we wanna do with particles any chance we can is to play with those factors, number for example and add variety so that the number variance varies the birthrate in there. I've got a lifespan and this is in frames. Now what I'm going to do is to make these particles go from zero to 60 and then I'll use a different system for the next shot, knowing full well that they won't work well in both shots.

I'll put this lifespan, well I'll leave it at a hundred so that they last longer than that shot in here and it gives them a chance to die off if they need but also for some to exist entirely. I'll pull up this lifespan variance though so that some start to dies off before the shot finishes while new ones are being born. We can use a style color or pick a color from the scene if we need. I'll leave it at style color for the moment and then start to look at how big this emitter is and what's going on.

With particles then, again, it matters how the crowd is behaving and the more there are of a particle, the less we care about how each one looks like. We care very much that a flock of birds at least loosely resembles birds but we don't really care what every drop of rain looks like. We care it's behaving like rain. So when I press play here, we've got this sphere populating and we can see some dying off. There's no velocity in it and they're just happening in there. Now what I'll do is play with the size of that emitter.

You can see in here if we scroll down, we've got control for velocity and rotation. And jumping over to region then takes us to the emitter and right now it's coming from a sphere. In here, when pull that down or up in this case, we can see that it's coming from a sphere, a rectangle, from a mesh or a line, or even a cube. I'll leave it at sphere but I'll increase the size of it. We've got translation, rotation, pivot, and size and I'll pull this size all the way up to get those particles nice and big.

Now if you think the size maxes out at one, think again. We can always drop in here and put in a size of, I don't know, 40 and press enter and we get a giant sphere emitting particles. I'll scroll back and what we can see here is in this huge sphere, we've got a ton of particles coming in. Now when I press play again, it gently populates with these particles and because their velocity is zero they just sit there, but some will twinkle off and on.

It's working terrifically. What I need to do then is to pipe this into my 3D render and see how it looks and then start to play with the behavior. I'll get that link set up in the first shot. Here in the flow then, giving myself a little more room, I'll scroll out and I'll take these particles and pull them over. I'll zoom in again on that underlay which I've colored blue and think about where I want them to happen in. We can have these particles dive in, in the merge, the first or second, or afterwards if we need.

I think what I'll do is merge them in before the camera so the camera sees everybody. I'll take from the pRender then and tuck it into Merge3D1. They merge in nicely so when we view that merge, pressing one and show it, the particles are actually in there in the scene in volume. The cool part then is if we go forward in our render, we'll see them through that camera. I'll pan over, pick Render3D1 and press one and there's little tinkles on the scene on that player.

I'll go back to frame zero, set my end render out here to 60 or actually 59 and so it's just showing this particular shot and play it. We've got little twinkles going on in there around the player. Perhaps too many but at least our particles are there in the scene and being scene in our 3D, which is now rendered out here. And now we can tune, well how they look and how many there are and what they do. What I'd like to have is that they're basically born and I think I'm gonna have them not die off so they're born and they stay there.

But they're definitely in their own 3D space in the shot so the camera can really move in. And I can even put a glow or other material on them and really make them pop to life as dust motes frozen in the air in this highly tense shot as we see that ball just start to drop.

Video: Creating an emitter and shaping the particles