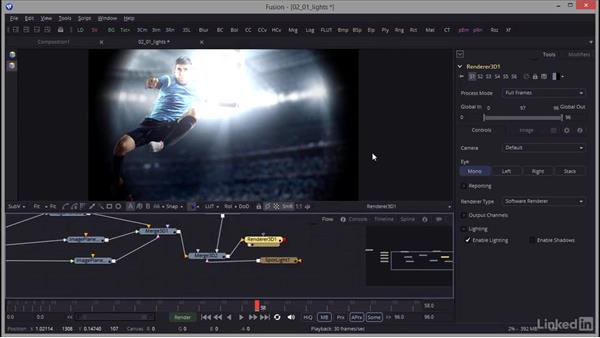 Join Adam Crespi for an in-depth discussion in this video Creating and adjusting spotlights to showcase elements, part of Fusion: Creating Motion Graphics.

- [Narrator] We can light anything we want to here in Fusion. We can do relighting of 3D scenes if we want, even using alternate renders, like RenderMan. What I'm going to do, though, is use some lights to kind of make these images a little more poignant, sort of bring attention, a little more, to exactly where we want the viewer to see. I've got my project open, and I'll pick my Merge 3D node, and show it by pressing one, here in the flow. And it shows it here in monitor one. And I switched back to one big view. What I'll do is to get a light in.

Right now, if we hold control and scroll in, and take a look. Everything in here is just lit as it was in the original photo. The player is pretty well back-lit and also front-lit from the stadium lights. And I'd like to dim the background a little bit, and put a little more light on the player and the ball. What I'll do first with that merge selected, is to check Pass Through Lights, to make sure that the lighting is moving forward. I'll do this on both merges, again, picking them, and passing through the lights. Then, here in the flow, I'll go into my Render3D node and enable lighting.

Again, this is an option, lighting and shadows. We can have both, none, whichever one we want. This lets us really dictate how this is supposed to look. So now that I'm ready to see my lights, I'll get my lights in. Here in the flow, then, I'll right-click, Add a tool, and under 3D, choose Light. I've got an ambient light, directional, point, and spot. And these are pretty common and function must the same way we'd expect from 3ds Max or Maya, for example. I'm going to use a spot light to start, putting a spot light in.

And we can see that it's linked, well, to nothing at the moment. These don't auto link in. So what I'll do is make sure I take this spot light, and I'm gonna drag it to this new pink arrow, here, on Merge 3D2. That's the last arrow that the merge created. We can see our merge, here, creates one more new arrow for another scene input. At the moment, just this one, the spot'll do nicely. I'll take my spot, making sure it's selected, pull it back on that Z axis, and hit the light button down here on the view port.

This way I actually see my lights in the scene. We pull that forward, we see, well, not much at the moment. We need to make sure that we're seeing in here, that Render. So I'll turn on the Render, and that's actually where we are. If we pick that Merge 3D, and show it, now we see our scene in the dark, except for that circle of light. Again, make sure you're showing up to the right point. I'll take this light and pull it back a little bit, pull it up on the Y, really focusing on the player.

And then I'll switch over to rotate, over here on the left side of that view port, and rotate down on that red X axis to really highlight the player and the ball. Now make sure I select my spot light, and we can play with some familiar tools. We've got the color of the light, an RGB, or we can pick from the scene if we need. We've got an Intesity right now, at one, and a Decay Type. And these function just like lights in Max or Maya, for example. Our cone angle, then, is the overall width of the light. And I'll pull this out to, let's say, 55, 53, somewhere in there.

The Penumbra, then, the softness of the diffused edge, is an angle half in and half out of the cone. So I'll soften that out to about six degrees. And then we've got Dropoff, from the center of the light to the edge, the fade. We can bring this up just a little bit. That light starts to fade out more. And then I'll bring this cone up just a touch, and the Penumbra. Really making sure that I highlight in here that player. It looks pretty good. So I'll make sure I check it out in my Render of 3D. It's a little bright, but I'm definitely highlighting him where I want.

Now use an ambient light as well, to get a little more of the scene tone back. I'll take a little bit of brightness out of that spot light, pulling it back, let's say, to, well, point six, somewhere in there. Then I'll add in an ambient. Right-clicking, choosing Add Tool, 3D, Light, and Ambient. There's our ambient light. And I'll put this into that merge. The ambient light is very, very bright, but we can use it to color tone.

What I'll do is blue tone this a little bit, clicking on Pick, and dragging over. And I get an eye dropper here in the scene. I'll go borrow one of those blue tones right from the bright lights on the stadium. And everything takes on that neat hint of blue behind. That ambient light is in, and then we can play with the Intensity as we need. With no ambient light, we have a circle inside, and black outside. And full starts to return all the color. So I'll pull this back a little bit, just to let that ball be in full light.

I'll also take my spot and bias the color just a little bit as well. That's a little too much blue, and so I'll back off the amount of blue, and how we're seeing it. Here in the Color, then, I'll click the down arrow, and open up a color wheel. And there's Hue, Saturation, and so forth. I'll take my Saturation down. And I'll do this either on the color wheel or by number. I'll pull the Saturation out, the Intensity back up, and now we've got this cool blue scene running around out player.

Fading off gently into the darkness around the stadium. We could always put some image effects on, if we need. Either after we Render everything or as part of the flow before it goes onto the image plane. It's up to you. Light contributing in my scene. I'll select my ambient light, and just pull up its Intensity a touch. Just bring back a little more color, but keeping it, definitely, cool. Again, we can open up our color wheel if we need. And we've got a Saturation and Value to play with. It's up to you how you'd like to run your colors.

What I'll do is just pull back the Saturation a touch on this, maybe taking it down to point two something. A little less saturation in there, and we start to see the player's skin tone. We can always bring this back if we needed to color-correct. But I like the way that we're dimming down the stadium around and really highlighting the ball and the player. We can even make specific layers not receive light, if we need. And this is where it gets really cool. For example, I'll pick my image plane for the background.

And in here, under lighting, we can say no, you're not affected by lights. Or yes, you are. I can do the same with the player. Let's say, for example, that the player is nice and bright, but the stadium really mutes out, and the ball is kind of bright against him. We've got all kinds of different ways we can run it. I'll leave him affected by lights so he mutes out a little bit. And try it out, planning to do some color correction later. But getting some lights in to really highlight in here, on these images, what we want to see is important.

We'll make sure that we check all the way through. Picking that Render 3D, making sure Enable Lighting, in this case, is on. And seeing how it looks. And in here we can see our other Renders. At the moment, I don't have anything else in besides the ones that come with Fusion. OpenGL, Open GL UV, and Software. Open GL doesn't give us much of a difference at the moment, it's really in how we deal with transparency, Z Buffer, and so forth. As I'm not doing any serious ray tracing, or otherwise in this. And no bouncing or re-lighting. I'm going to leave it at the Software Render for the moment.

I'll make sure that the Camera is set to come from my camera. And I'm ready to get other images and cameras going, and start to sync them together with other lighting, really bringing it to life.