Adding an underlay to organize the flow 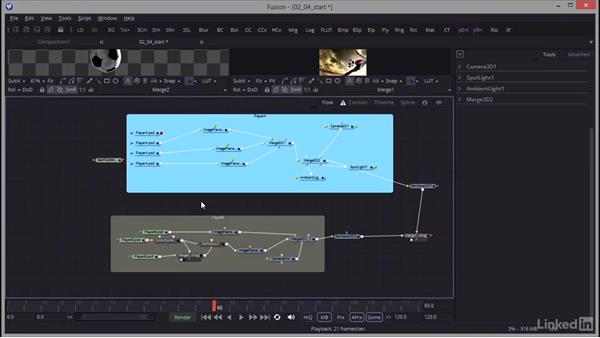 Join Adam Crespi for an in-depth discussion in this video Adding an underlay to organize the flow, part of Fusion: Creating Motion Graphics.

- [Instructor] What we've seen so far…in the construction of this spot is that…it's really easy to play around with things.…We've got a lot of flexibility in how we work,…and really quickly, we can get a lot of nodes going.…What we can see here in my flow,…between the A and the B shots, is that…I've got, well, several dozen nodes.…Now, believe me, this is actually quite simple.…I've worked in flows of several hundred,…bringing in 3D objects, all kinds of particles,…all kinds of rematerialing things,…all kinds of stuff going on.…So this, although it looks moderately complex,…is actually really not bad, but a little…organization will really help.…

I'm going to put in some underlays,…some flow tools here, and group these pieces together…so that I can select a whole bunch…of different nodes and move them around as one.…Now, this is not a group, but merely a way…to take all the nodes and sort of corral them…in one area.…I'll right-click and choose add tool…and flow, and pick underlay right here in the flow.…An underlay, then, is a backdrop.…

Video: Adding an underlay to organize the flow