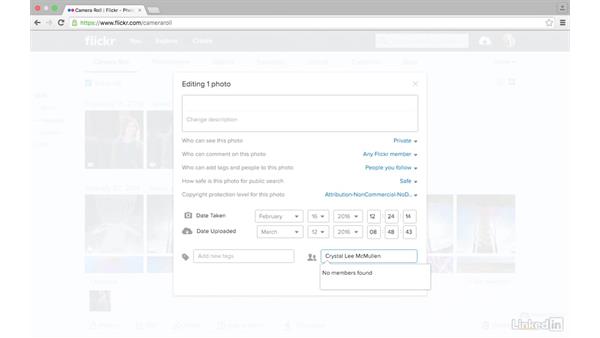 You have a lot of control over the images you place in your Flickr account. You may have included shots directly from your camera that you want to do something at a later time. For example, you can identify a person who is in the picture. Learn more about this feature in this video.

- [Voiceover] If you have a friend in Flickr,…and you want to identify that person in a photo,…I'll show you where to do that.…Again, it's the magical Edit menu.…(laughs)…A lot of good stuff in there, isn't there?…So we're in the camera roll,…I went ahead and selected this picture of Crystal,…and I'll go down here to edit.…And then you add the people.…Now the interesting thing about this is that…it will try to auto-fill as you type.…Watch what happens here.…See, as I was typing, it first showed me all the Crystals…that it could find initially.…

All the Crystal Lees.…And then we got to Crystal Lee McMullen,…and there were no members found.…She's not on Flickr.…So it really wouldn't do any good to identify her here.…However, if she was on Flickr,…then the main task I would have…is making sure that I got the right Crystal Lee.…You have to be careful about that,…and it really helps if you know the person's avatar.…If you know their avatar,…we'll go back here a little bit so we get something,…then when you're typing,…then you go, "Oh, okay. That is my friend there."…