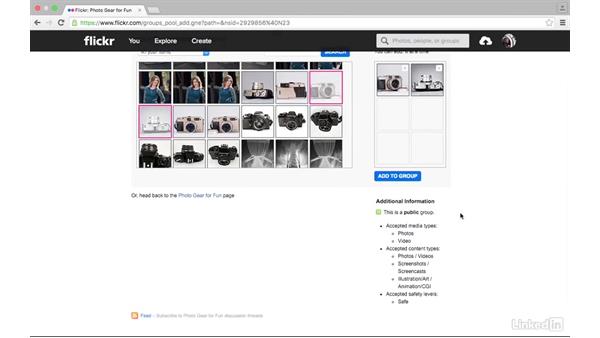 Flickr has a strong social and community aspect to it. You can connect with other photographers on many different levels. The platform is also designed so that work can also be made available to the community at large. Among these opportunities, you can join established groups that have similar interests to yours. Learn more about this feature in this video.

- [Voiceover] I have some equipment here that I really like. Wouldn't it be nice to find a place where I could share my pictures, and then I could look at pictures of other people's gear, also. Well, that what groups are. Groups are especially for that. If you have a passion for wildlife or gear, for architecture, then there's definitely a group for you, and that's what this movie's about. We're gonna explore groups, how to find them, join them, and then contribute to them.

So, first let's find a group where I can share some of these pictures. So, I'm gonna go up here, and let's see here. I'm going to search for Photo Gear for Fun, and I'm gonna search groups, and you're probably not surprised that there is a group called Photo Gear for Fun. (laughs) All right, so well, let's take a look at it first. I mean, we could just join, but let's take a look at it. Let's see what's going on here, and sure enough, brand new group here, but this looks like what I'm after here.

Okay, fantastic. Top Contributors, look at the Top Contributor here. I've heard about him. I hear that he really likes Photo Gear. All right, so once I find a group that I like, then I could just join it. Easy enough, just right there, and I could start a discussion, if I wanted to. You know, I'm in there now. Now, some groups will have particular rules. This group is just wide open, so once you join, you're in, and you can start doing stuff, but some groups will say, hey, we only want you to contribute, like one photo a day, or the type of content that we want is like this, you know, and they'll be a moderator that maybe even has to approve it first.

So, it really depends on the rules of the group. Most groups are fairly open, though, and they just want you to share your photos and then enjoy the photos of others. Now, there's a couple ways that we can add a photo to the group. This big blue button, there's a clue, huh? Let me click on that, and it takes me over here, and let's just say that I wanna add a few. Well, let's not add them all. I like this one, and we'll do that one, and we'll save these, 'cause I'm gonna show you a different way to add them, also, and then here's the rules of the road right down here.

It's a public group. This is what they accept, and so, some groups will have different things here, and you can read that and then, you know, adhere to it. Respect what the administrator wants for that particular group. All right, so we're gonna add these, and now they will become part of the pool. So, now I have my stuff in this group, and then it's joining the stuff of others. I can view all the photos in this particular group.

It's kinda neat. By the way, this is a real group, so if you wanna join and share your gear pictures, I'm more than happy to look at them, believe me. I love photography gear. I think it's artwork to my eyes, modern sculpture, right? Okay, so there we are. So, we are now participating in a group, both as contributors and as viewers. Now, I wanna show you one other way to add a photo to a group.

So, let's go back to our Photostream, and I wanna add, let's add this shot. I like this shot here. So, I'm just gonna click on it, and down here you'll see that I have the opportunity to add it to a group, and then it'll show me the groups that I'm members of, and so if you're a member of, like, five or six different groups, they'll all be listed here, and you know, that's quite plausible, right? Because you have probably many interests, Photo Gear, Wildlife Architecture, all that kinda stuff, and so then you can pick the group that's appropriate for the photo.

You probably had one in mind, right? You know, when you decided you wanted to do this. So, you just click on that. Click Done, and now this photo is in one group. All right, so it's just like that, and if you wanna see it, just click here, and now it's been added to the pool of that group. So, groups are a lot of fun, and I'll tell ya, you can go up here, and you can just start searching under various terms, all sorts of stuff, whatever your interests are. You'll have a lot of different options, because there are a lot of groups in Flickr, so you know, a lot of choices.

Go over, take a look at the images, look at the rules of the group, and if you find one that's a good fit for you, join it, start contributing, and start enjoying those pictures. I tell ya, it is another way for us to share our images with one another.