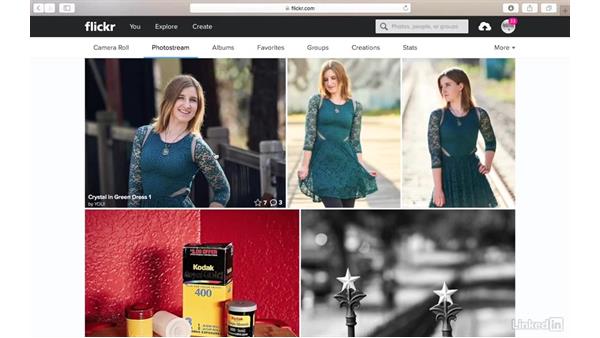 he Photostream is the traditional Flickr viewing environment that is also public facing. The Camera Roll is newer and its images are marked as private until otherwise labeled. For a Camera Roll image to be viewable in the Photostream, it must be marked as Public. This gives photographers control over what can be seen and what remains private. Learn more about these differences in this video.

- [Voiceover] Let's discuss for a minute the difference between camera roll, what we're looking at right now, and photostream, which we'll look at here in a second. These are two basic ways to look at your images on your Flickr account. Now, the camera roll, this is something that I have set up so that the pictures automatically flow into it. This is my private area. So until I decide to choose an image from my camera roll, it stays private.

This is also where the images are automatically backed up. So the camera roll is literally that. If you think about it as a roll of film, and you're taking pictures, taking pictures, taking pictures, you're not gonna make prints of every one of those shots and enlargements. You're just going to pick one or two out of that roll and make an enlargement. And that metaphor works here for Flickr, also. So you see that, for instance, I had these shots here. And then photostream is where I decide what gets published.

This is what I share with the world right here. So from my camera roll, where you saw a whole bunch of shots, I took three shots, and I put them here in the photostream. Now, people can see these shots here, and they can take a look at them, and they can comment on them if they want here. I have a few favorites, I have a few comments. And people can say, "Hey, I really like that shot," Or, "Why did you do this?" Or, "That background is really nice and soft." All that kind of stuff. So, these are curated here in the photostream.

And this is where the sharing experience happens. Not only you sharing with the world, but the world getting to see what you're doing. And that is the basic difference. Now, in the early days of Flickr, we only had the photostream. We did not have the camera roll. That is somewhat of a recent development, and it's one that I really like. What they needed to do was add the one terabyte of storage to make camera roll really work, right? So the images can just flow into it without you thinking about do you have enough space left to hold them? Before, with the photostream, we had to decide what goes on Flickr, and everything else had to go somewhere else.

Now, we can just go ahead and let everything flow in. Let's go back down to where I was. Here we go. Let that whole shoot happen, and then go, "Hey! I like this shot, I like that shot." And then move those over to the photostream, where I can share them with the world. So that's essentially how that works. Obviously, we're gonna be talking in greater detail about both functions. But I wanted you to be clear on their distinction right up front.