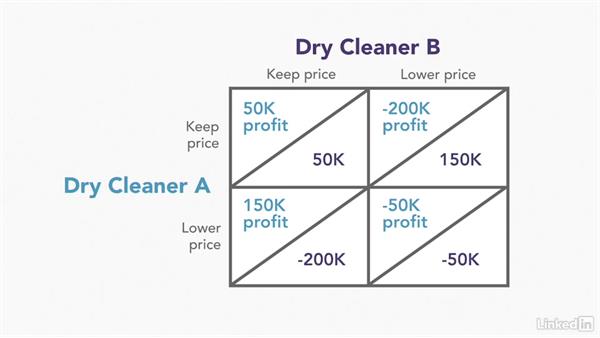 Game theory describes the moves and countermoves between two parties who try to optimize their own result. A good example are price wars. In price wars, competing firms undercut each other’s prices, often to the point where none of them makes any profit and some go bankrupt. A better understanding of Game Theory helps decisions makers to strategize better than their competitors.

- Managerial Economics is not just one theory, but rather a collection of several theories that are applied into managerial settings. In this video, we will learn about game theory. Game theory describes the moves and countermoves between two parties who try to optimize their own results. This can be two competing firms, two candidates running for office, an employee and an employer or even a married couple. Married couple examples are sometimes the best, but it would stretch the purpose of this video.

A good example in business is price wars. In price wars, competing firms undercut each other prices often to the point where none of them makes any profit and some go bankrupt. Game theory describes every game in a formal language. We need to identify the players, their actions and the result of their actions. The best tool to do so is a Pay-Out Matrix. The set-up is a small remote town in the Midwest with two dry cleaners. Both are doing somewhat okay, but both would like to generate more revenues to invest in new machinery.

Both charge basically the same price, $2 for shirt and $10 for dress. Dry Cleaner A considers to reduce the price by 10%. He assumes that many customers of B are not very loyal and will switch. Indeed, if 25% of B's customers do switch, A's profit will increase from $50,000 to $150,000. However, we don't know how B will react to such a price move.

The actions of B are also formalized as either keep the price or lower the price. If B would keep the price high, A could increase its profit to 150,000 through a lower price. However, if B decides to lower the price as well, A will have loss of 50,000. He reduced his revenue and because he's no longer cheaper than B, he will also not win any new customers.

In the worst case, A keeps the original price and B lowers his, resulting in a loss of $200,000. Assuming that B faces exactly the same options, the full pay-out matrix looks like this. The difficulty for both parties is of course, that they don't know what the other party's going to do. So let's look at the best strategy for A who does not know what B is going to do.

Interestingly enough, A is always better off with the lower price regardless of B's reaction. 150,000 is higher than 50,000 and -50,000 is better than -200,000. The same is true for B. Taken together, if both players maximize the profit independently, they will both lower the price and suffer a loss. This is disturbing because if neither of them had changed their price, they would still be enjoying a profit.

Of course, the government likes competition because it leads to lower prices for consumers. That's why competitors are not allowed to discuss prices with each other. However in some situations, firms know that a price decrease will lead to a short-term increase in profit before competition reacts. In some markets, especially if one seller is desperate, price wars develop. How does game theory apply in politics? In U.S. elections for example, candidates are not maximizing individual votes.

If a candidate has a clear lead in one state, he or she will not fight hard to win more voters, since all electoral votes are awarded to the winning candidates, except for a few states. Or, if a candidate is very unpopular in one state, he or she may not invest resources to change that if the opponent is even more unpopular. The resources will be spent to maximize the likelihood that the candidate wins the majority of the electoral votes.

The average happiness of the average voter is irrelevant from a game theory perspective. Game theory can also be illustrated with the story when a Chief Financial Officer fights with the HR Managers over the budget for training. Asks the CFO, what if we spend that much money and then the employee leaves the company? To which the HR Manager replies, but what if we don't train them and they stay? So if you can see, game theory allows you to work through a few alternative scenarios before deciding.

And I encourage you to formalize important decisions in which the outcome depends upon the moves of the other party. This helps you to strategize and find the best possible course of action.