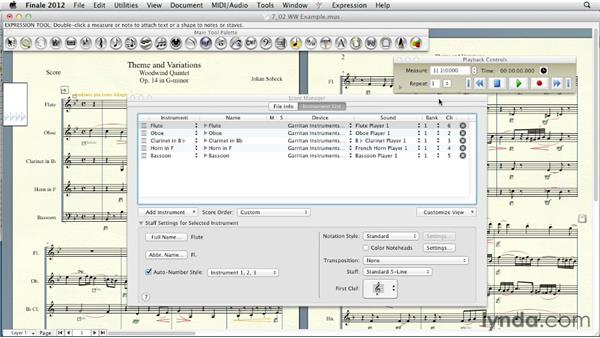 For the most part, I use Finale as a notation program and not as a music- production application like Logic or Pro tools. That said, the sounds available and the ability to adjust the performance in Finale are improving all the time, so it's definitely worth a closer look. So if you would, go ahead and open the 7_02 Woodwind example file, and let's click the MIDI/Audio menu, because I want to talk a little bit about these first two options here: Play Finale Through Audio Units--and that would be Play Finale Through VST on a PC--and Play Finale Through MIDI. Now, if you choose Play Finale Through MIDI, Finale is going to use the sounds that you chose in Device Setup and MIDI/Internal Speaker Setup.

Now, if we go in there, we'll see that I have set this to play back on the SmartMusic SoftSynth, and we have the choice of QuickTime and MIDI System there as well. Now, one of the reasons that I point this out is because when you're entering notes, you don't really want the playback to get in the way and if you're using something that's in audio unit or VST plug-in format, they are going to take up more CPU usage and it's actually going to slow things down. But it doesn't sound real great this way. It's just kind of a basic sound set.

So let's hear what it sounds like with Play Finale Through MIDI. Go ahead and click Play. (music playing) And it's a very, very basic sound set. Now, if I go and I choose Play Finale Through Audio Units, it's immediately going to sound a little bit better. (music playing) Now, if we open up the Score Manager, we can actually watch and see what's going on. So I am going to go to Window > Score Manager and we can see that it's currently assigned to the Garritan Instruments.

Now, if I go back up to MIDI/Audio and choose Play Finale Through MIDI, watch what happens. It immediately changes it back to the SmartMusic SoftSynth and the default sounds. So I will go back to MIDI/Audio and I am going to choose Play Finale Through Audio Units--that would be Through VST on a PC--and it immediately switches it to the Garritan Instruments for Finale. That's the sound set that comes with Finale, so you should load that if you have the disk space for it. Also, if you had other audio units or VST plug-ins, you could choose them here on this list.

Now, I have only got these two, which are actually kind of sound-related sample players, and these other ones down here, like the ARIA Player, this is actually kind of their mixer that's associated with the Garritan instruments. Now, if I choose this, I want to show you something that happens. We get this little button that changes over here to Edit Player in red. So for example if you were going to use a third-party plug-in like Contact, you would see this Edit Player button and then when you click that, it would actually open up the third-party plug- in, and you would actually be able to choose and load sounds at that point.

And if I click on that, we'll see the Garritan audio player pop up, and this actually isn't the way we would do it with this particular one, so I am going to close it. But that would be what would happen if you had Contact. I am going to click that and put that back on Garritan instruments for Finale and now it assigns a sound. Now if I click in here, you can see that I have got some different sounds that I can choose, and I could even go down into the Woodwinds category and I could see the same type of thing. Now, you might wonder why we have multiple flute players, because if we were doing this in more of an orchestral score, you might want a different flute player for the different flute parts. And while we're here, let me show you that in the Single Strings we'll also see things like Violin Solo KS and Violin Solo.

Well, the difference here is that the KS stands for Key Switching, and when you use a sound that has a key-switching set, what will actually happen is that Finale will actually switch samples when it sees an articulation. So if we see the smart shape with a legato marking, it's going to play legato, but as soon as it starts seeing accents and staccatos and things like that, it's actually going to switch sample sets to the correct sample, and we'll get a staccato sample with a staccato articulation.

And using a key-switching sample will actually really improve the sound of what you get, because it's going to sound more human-like and you're going to get the right articulation with the right note. So a couple of other things we can do with these Audio Units plug-ins are first of all, you may want to manage the ones that you actually see. So if I go into Device Setup, I can actually choose Manage AU Plug-ins--and again that would be Manage VST on a PC--and you will see a list of the active and inactive plug-ins that are in that format.

So anything that's in the upper pane is currently active and anything that's in the lower pane is inactive. So if you've got a bunch of stuff up here that you're not using, you can actually choose it and then click the Make Inactive button. Now, the ones that are already inactive might be there because Finale actually couldn't use them. So if I click one of these and choose Make Active, we're likely to get an error message like this that said hey! The last time Finale tried to use this, it didn't work, so do you want to try it again? In this case, I will just click No and go on. Close that.

Now, the other thing you might check is the actual priority of the sounds that are being used. So if I go into Sound Map Priority, I will see this dialog box that says, hey! The two things that you're actually using for sample players right now are the Garritan Instruments for Finale and the SmartMusic SoftSynth. Is there a priority that you want to use those in? And usually I will actually put the SmartMusic SoftSynth first so that Finale automatically defaults to that, and then later, when I get to the end of finishing a score, I will manually set it to play with Garritan Instruments for Finale by simply going up to the MIDI /Audio menu and choosing Play Finale Through Audio Units, or Play Finale Through VST.

Now, we can also do some fancy stuff with the Audio Units and Banks & Effects settings. So I am going to open up that dialog, and we can see that the Garritan player is assigned to the first bank. Now I have got only four instruments, so I am not using multiple banks now. And I can go over to the Effects column and I can click on that, and I can choose a different reverb to be used with this, so I will choose the Garritan: Ambience reverb. And then if I click the pencil that's next to that, I can actually go in and choose a preset. And I will use Recital Hall here and you notice that some of those settings changed, and then I can actually modify that even more.

Now, a lot of these presents sound very wet, meaning that there's a lot of reverb on them. So if I bring up the Dry Gain, that's going to accentuate the sound that doesn't have any reverb on it. So I might bring that up. Let's go ahead and close that. Put that on top. Now, if I click this, you're going to hear that this is starting to sound a lot better. (music playing) Now, if I wanted to further modify that, I could actually bring up a little mixer that's associated with the Garritan ARIA Player by clicking on this pencil, and I get another mixer window that kind of overlays on top of the Finale mixer window, and I can make further settings.

I've already have balanced this a little bit, because the French Horn originally was a little bit loud, and the clarinet as well. So I have already made some adjustments there. In addition, I can also click the Effects tab over here on the right and I can also set or change the preset here--so let me put that on Recital Hall--and now I don't get so many parameters. I only get the most often used ones, and you might find this just a little bit better place to start. Now, if you want to add an effect that's going to affect all of the banks--and this would be for a score when you have more instruments than we have in this particular score--you can add a master effect, and usually you'll do this to add EQ or maybe a little compression.

So if I bring up this AUParametricEQ, I can click the Pencil tool, and then maybe if I wanted to make a little cut in the low midrange, I could pull that down, and you can click in these fields and you can actually change the values that way. So I can type 3.0 there instead, and now that's affecting a little bit wider range. As you can see, the sounds you use can easily be changed using the Score Manager, and you can further fine-tune the sound of your score by adding audio effects.

1/6/2012
Finale is the standard application used by musicians of all levels to compose, arrange, play, and print music. In this course, Rick Schmunk shows any aspiring or professional musician, composer, or arranger how to become proficient with Finale 2012. The course shows how to notate musical scores, ranging from simple lead sheets and guitar tablature parts to detailed scores, and bring them to life with instruments and share them with an audience.
Topics include: