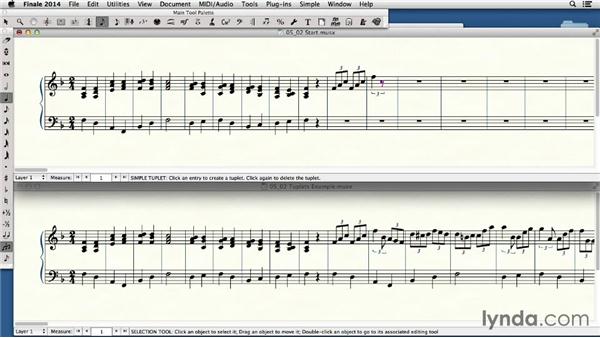 Up to this point, we've learned how to enter basic note durations. In this video, we'll learn how to enter simple triplets and triplets of mixed note durations. A triplets are included within a type of rhythm referred to as a tuplet, and that's defined as any irregular division of a rhythmic duration. An addition to triplets includes quintuplets and sextuplets. So I've opened up the 05_02 start file, and the 05_02 Tuplets Example. And I've tiled them, and I've put them both in scroll view as we've done in past videos. So to enter triplets I'm going to go ahead and select the simple entry tool.

My cursor came in the first measure there, so I'm going to hold down on my option key and click in that first open measure. And that puts my cursor into the measure without actually adding a note. You can do the same thing on a PC by pressing control and clicking into the measure. To enter triplets, I can simply enter the first note, and I'm going to put my cursor just a little bit closer to that f we need so that it actually comes in the right active. And then I'll press f on my computer keyboard, and now I'm going to press the number nine on my num pad, to tell finale that I'm actually in the process of entering a group of triplets.

That puts a bracket around it and now I can add the other two notes to replace those two rests that you see. So I'll type A and C, and then I'll type in another F. Notice tha tit came in in the wrong octave, so I'll arrow back over and I'll shift arrow down to get that in the right octave. And if I put in the next note, it will be in the wrong octave too, so I'm going to shift down to get closer to where I need it to be, and now I'll type nine again, to tell that it is triplets and then press a and c again. Now, the next one is a little bit more complicated.

Notice that it is still an eighth note triplet, but the first, no it's a quarter note. So I'll type a five for a quarter note and this time I'm going to come over on the tool bar and activate the tuplet tool before I enter the next note. This is going to allow me to shift click that first note in and when I do that it opens up this simple entry tuplet definition dialogue. And what this is saying, it's going to add tuplets, three of the current value in the space of two of the current value. But, my first note is a quarter note and that would be incorrect.

So, I want to click that dropdown and I want to choose 3 8ths in the space of 2 8ths, and then I'll click OK. The first note comes in in the right duration and the tuplet is the right duration as well. And now I'll just arrow over to the next note and I'm going to need a four there, so, I'll type four, I'll enter that B flat. Then we've got a string of triplets to enter. So, I've got the four selected for eighth notes and I've still got the Tuplet Entry enabled, which is going to allow me to just enter a string of triplets without actually activating that Tuplet tool again.

So, I'll type in A G F. And I'm going to need to arrow up a little bit to get my cursor in the right octave. And then I'll press D C Plus, to add the sharp, another D. And then F, E, D. Now, on that B, I need that to be a B natural. So I'll hit the plus to raise that a half a step. And now I've got C, C, F, A. And again we're on a quarter note and eight note mixed tuplets, so I'll hold down my shift-key and click.

Again, that opens up the simply entry tuplet definition and I'll change that again to three eights in the space of two-eights, and click OK. It puts the A in can arrow over the next note, press a four. And enter that last note which is going to be a B-flat. Now that came in in the wrong octave so I'll left arrow back over to that and Shift, down arrow, that into the right octave. And, move over to enter the next note, and then Shift, arrow down to get that in the right octave for the next note.

Now you'll get to a point that you don't have to enter triplets, and if you've got the tuplet tool active, you can disable that by simply pressing the duration you need to add twice. And that will clear the tuplet from the simple entry, so, watch my simple entry palette here as I press 4 twice. Notice that now it says eights nodes, and the simple entry toplet is not enabled. So, go ahead and enter the rest of those triplets, and I'm also going to go ahead and copy the baseline that we got there and paste that over so that we got the first sixteen measures of this done.

So I"m going to hit my escape key to get to the selection tool. Shift select that first eight measures, press Cmd+c, and Cmd+v, and we've got the bass line in for the next eight measures. Entering triplets, and other forms of tuplets can be a bit tricky at first, find some more music with lots of triplets and enter it into Finale. With a little bit of practice, you'll quickly remember the necessary steps.

5/29/2014
If you've always wanted to notate your songs and compositions and print your music for rehearsals and live performances, this is the course for you. Finale 2014 is the recognized standard application used by musicians of all levels to compose, arrange, and publish music. Join composer Rick Schmunk and learn how to notate musical scores that range from simple lead sheets or guitar tablature to detailed scores that even include video. Discover how to enter notes, lyrics, chord symbols, and tab, and use Score Manager and linked parts to save time formatting your score. Want to be even more efficient? Learn how to use SmartFind and Paint to add markings like articulations and expressions. Rick also reveals the secrets to notating drum set and other rhythm section parts. Finally, he shows how to export MIDI, XML, and graphic formats like PDF and EPUB, so you can work with your scores in other publishing and editing programs or simply share your work with colleagues.
Topics include: