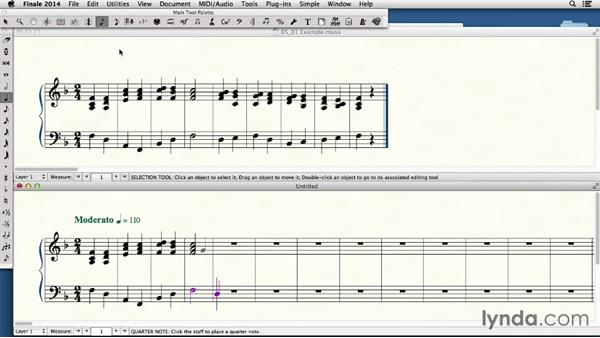 I often prefer entering notes using a computer keyboard. But when there are intervals and chords, like in music for piano, it's much easier and faster to use a MIDI keyboard. So let's set up a new score. So I'm going to go to the set up wizard. Choose Engrave Style. I'll click Next. Let's choose Grand Staff, and I'll click Add, and Next, and now let's add in our score information. So we're going to notate Twinkle, Twinkle. Call this Variations on a Theme. This is going to be kind of the way Mozart did it, so I'll type A la Mozart.

I'll click my Next button, this is going to be in 2/4 and F major, so I'll click once below the little scroll button. I'm going to specify initial tempo marking, this is going to be Moderato, and lets set the tempo at about 110 BPM. There's no pick up measure, and we'll add measures later if we need them, so I'll go ahead and click Finish. So that's set up our score for us. Open up the 05_01 Example, and I'm going to go ahead and then tile the two of those, so I'll go Window > Tile Windows, and then I'm going to put them both into scroll view.

So, I'll go Cmd+E, that'll be Ctrl+E on a PC. And let me make that just a little bigger, so I'll zoom in and that's Cmd+(+) or Ctrl+(+) on a PC. And I'll do the same thing in this bottom window. There we go. So entering chords is pretty easy. I'm going to go ahead and I'm going to select the Simple Entry tool, and again I can set my rhythmic value that I'm going to enter, by pressing on a number on the num pad. So it's going to be 5 for quarter note. And now I can just play these chords.

Now, this is a non-real-time recording, so I can play a chord. Get ready for the next one. Play that one. And in this fourth measure, I'll need to enter a half note. So I'll go ahead and hit 6 for half note. And play the chord. Now if I need to enter the bass line, I'll move my cursor down into the bass clef by holding down Cmd and pressing my down arrow. That would be Ctrl+down arrow on a PC. Then I'll move on over to the first measure using my arrow keys. Press 5 for a quarter note, and now I can quickly enter that bass line.

And again 6 for a half note, 5 for a quarter note, and I'll enter the rest of those notes. And then I can enter that last rest by either pressing my right arrow to move to the next measure, or I can simply enter a note,. And press my R key to toggle that into a rest. So, now I'm going to go back up to the treble clef and we'll talk about entering the chords in the last four measures there a little bit differently.

So, again, I'll use Cmd+up arrow to move a staff up. That would be Ctrl+up arrow on a PC, and then I'll use my left arrow key to move back over to the bar where I want to start entering notes. I can also use my computer keyboard to enter chords. So again, you'll select the value or the duration using a number on your num pad, so 5 for quarter notes. And then I can press the letter that represents the name of the note. So in this case F. Or you can move the note cursor onto the line or space that you want to add the note, by using the up or down arrow keys and hit Return.

So I'll go ahead and do that. I'm already on the F line, or the F space, I should say, and I'll hit my Return key to enter that note. Now if I want to add notes to that chord while it's still selected, I'll just press the number that represents the interval above which I want to add. So, for example, if I want that A, that's a third above F, so I'll press 3 And the B flat is a second above the A, so I'll hit 2 I've got that chord, so now I can enter the next one.

And I can also do that going top down. So, for example I'll hit B to enter that B flat, it enters it and now the G is going to be a third below that. So, I'll hit Shift+3 to add an interval below. And then the next note is going to be a fifth below that so I'll enter Shift+5. If you find yourself needing to edit one of the notes within the chord, you can move your cursor over that chord by using your left and right arrows to select a note within that chord.

And then once you've actually select a note on the chord, you can use the Cmd+up arrow to select the note above what you've got selected. You'll see that I'm moving up and now if you want to go down again, you can go Cmd+down arrow and once you've got that note selected, you can just use your up and down arrow keys to adjust the pitch. As you can see, using a mini keyboard to enter notes is useful, especially when you enter chords. Two-handed entry, one hand on the mini keyboard and one hand on the computer keyboard, takes a bit to get used to. But with some practice you'll find it's easy.

5/29/2014
If you've always wanted to notate your songs and compositions and print your music for rehearsals and live performances, this is the course for you. Finale 2014 is the recognized standard application used by musicians of all levels to compose, arrange, and publish music. Join composer Rick Schmunk and learn how to notate musical scores that range from simple lead sheets or guitar tablature to detailed scores that even include video. Discover how to enter notes, lyrics, chord symbols, and tab, and use Score Manager and linked parts to save time formatting your score. Want to be even more efficient? Learn how to use SmartFind and Paint to add markings like articulations and expressions. Rick also reveals the secrets to notating drum set and other rhythm section parts. Finally, he shows how to export MIDI, XML, and graphic formats like PDF and EPUB, so you can work with your scores in other publishing and editing programs or simply share your work with colleagues.
Topics include: