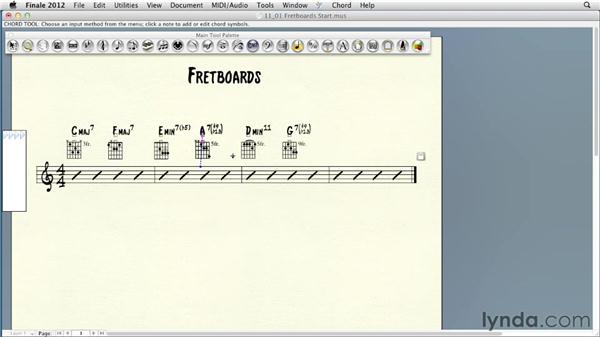 If you're notating lead sheets or guitar specific music, you want to add fretboard diagrams to your scores. If you are as picky as I am you may want to choose specific Chord voicings that might require you to create a custom fretboard diagram. So if you would let's go to the 11_01 folder and open up the Fretboard Start file and once you get there and open it, let's zoom in just a little bit. So I'll go Command+Equals on the Mac its Ctrl+Equals on the PC and then let's put fretboard diagrams into the score. We can do that by choosing the Chord tool then going to the Chord menu and choosing Show Fretboards.

Finale assigns a default Chord Fretboard to each chord symbol and at this point you might want to work with the spacing just a little bit. And remember that we can actually set the baseline for the fretboards at one point and then we'll have to switch and do the chord symbol separately. So let's go up to the chord menu, let's choose Position Fretboards and now the positioning triangles on the left- hand side, work only for the fretboards. So I can pull those down until I've got those where I want them and go back into the chord menu and I can choose Position Chords.

Now the triangles allow me to set the baseline for the chords. Okay, so let's look through here and I see I like some of these voicings but not others. To change this fretboard diagram, I am going to right-click on that Chord Positioning handle and choose Edit Chord Definition from the dialog. Then in the Fretboard area, I'll click Select. And here I see an alternative voicing and that one is okay. So I'll choose that one and click select and OK and assign that to the score. And as I scan down, that's okay, that's okay.

Now this A 7 voicing is not my favorite, so let's again right-click on that handle, choose Edit Chord Definition and then again click select in the Fretboard area. Now this time there is alternative, so I am going to actually have to make one. So I click Create and that brings me into the Fretboard Editor. Now if you want, you can give a name when you create a chord, so that you have a reference point for that, so I'll select that and I'll type 7(#9 b 13). Now that doesn't actually print or show on the score.

It's just for a reference. Now below that, in this Instrument pop-up menu, I can tell it what actual instrument that I'm doing this for. And you can see that there is just all kinds of stuff here, Banjos and Dulcimers and the old Gambas and Guitars and Lutes. But I am just doing is standard guitar. So the Chord I am about to create actually starts at the fifth fret. So I am going to click Show Fretboard Number and 5. That changes this designation here to the fifth fret. Now that can go over to this pallet and choose shapes.

So I am going to choose the X because the bottom two strings need to be muted. Then I'll choose the dot shape to indicate where the fingers go. So I'll put that on the fifth fret and here on the sixth fret on both the G and B strings. Then on the top B string, I'll put that up on the eighth fret. Now that I've got that defined, I will go ahead and click OK and select and yet OK one more time and now I can see that I've got the chord voicing that I like here. And as I scan down I can see, well you know something the G 7 is the same chord symbol, let's see if I can use that other one.

So let's right-click on that, I'll choose Edit Chord Definition and select and I don't have that other option. So let me cancel out of there, cancel again and let's go back to the A chord and this time I am going to go right to Edit Fretboard. So here is the voicing I want to use and the mistake that I made is I did not Generate the voicing for the other pitches in the chromatic scale. So if I click Generate, I now have a group of these voicings. And any chord route that I choose where I use this chord symbol, I'll be able to use that.

So let's say OK, let's come back into the score, and let's go down to the G Chord. This time I'll go Edit Core Definition, Select in the fretboard area and I'll choose, there is the one I want and notice that it sets us on the third fret, down two frets from the version that we had for A, because it down a whole step. Click Select, OK and I can assign that to the score. Now let's add a chord just for the heck of it. Actually I've got manual input selected, click once. Let's go ahead and click C and I'll enter that.

And it's has chosen a Chord voicing I don't want to use, so I am going to right-click on that and I am going to choose Edit Chord Definition again and let's go into the fretboard selection area. Now there is a bunch of options here and I am going to pretend that I'll actually see these, because I am actually looking to put that one in. But I want to show you how to create that. So I am going to click the Create button and I'll just call this Major or in this case I can leave it empty because the chord symbol will just see, so I actually take that out. So this chord symbol I want to create is going to be up on the eighth fret.

So that's one way you might do this. Now I don't have any fingerings out here in the score for the other chords, so let me erase all of those. And this time I am just going to indicate that there is a bar happening. So I'll take this symbol and I'll click from the string that I want it to start on and drug over to the string that I want to stop on. Now, you'll notice that the default size for this fretboard diagram is four frets. If you actually have a chord that needs more frets than that, you can indicate that by typing the number of frets that you need, right here in this field and then you can actually put multiple items on a string, if you check this box.

So I click OK and let's select and I can add that to the score. And now we've got our bar chord in there. As you can see adding, editing and creating fretboard diagrams is not difficult and can allow musicians who may not read music to play your songs or compositions.

1/6/2012
Finale is the standard application used by musicians of all levels to compose, arrange, play, and print music. In this course, Rick Schmunk shows any aspiring or professional musician, composer, or arranger how to become proficient with Finale 2012. The course shows how to notate musical scores, ranging from simple lead sheets and guitar tablature parts to detailed scores, and bring them to life with instruments and share them with an audience.
Topics include: