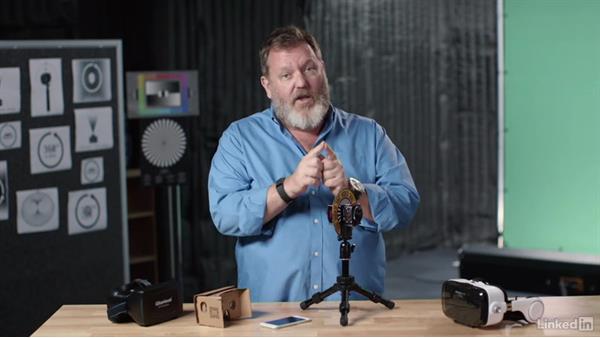 Working with 360° video presents us with many challenges that video production doesn’t. For starters, the camera can see in every direction, so there’s nowhere to hide your camera operator or the mount the camera is sitting on. You can embrace the limitations of the format. But if you want to hide your lights and crew, you have to think it through, and have places for people to hide or plan to do special effects in post. The key thing to consider when shooting is the stitch.

- Working with 360 video presents us with many challenges. The video production as we're used to it doesn't. For starters, the camera can see in every direction, so there's nowhere to hide. That goes for your camera operator, as well as the mount the camera is sitting on. Now this is fine, if you're doing something vérité, and you can embrace the limitations of the format. But if you want to hide your lights, and your crew, you have to think it through, and either have places for people to hide, or plan to do special effects later on to cover things up in post.

The key thing to consider when shooting is the stitch. With this camera, there's only one stitch joining the front hemisphere to the back hemisphere. And this stitch can easily be hidden, until someone walks through it. We'll get into the nuts and bolts of this later on when I teach you how to stitch shots together. But the more you can keep people out of this stitch, the better off you'll be. You should also consider your subject matter. Does it even lend itself to 360 video in the first place? Are you shooting in an interesting environment, with lots for people to look at? Are you shooting something with important details that you need the audience to see? Have you blocked it in such a way to lead your viewers eye to where you want them to see these details? A camera takes the place of the viewer, but it's up to them where they look.

So you need to plan for that accordingly. Another important consideration before you get into immersive video, is it needs to be at least 4K resolution to be sharp enough to look decent in 360. Now this is a 4K camera, but if you're used to editing 1080p HD video files, you may find that these 4K files overwhelm your computer. It pays to have the fastest possible computer to edit and render this stuff, and the fastest possible internet service to upload and download it.

Unless you have the latest editing gear, working with 360 4K files will be a sluggish affair. And since it's such a new format, no one knows how to watch it yet. And there are a wide variety of apps for looking at VR on your phone, but I've found they take a lot of trial and error to make work. YouTube has made some great strides in this field. The YouTube players on smartphones and tablets are all set up for 360 video and for putting these things in Google Cardboard or other head mounted displays. But it's still a challenge to get people to watch this stuff the way that makes it look best.

I'll show you some of these techniques and best practices in the next video. And hopefully, the tools will get better, and people will get more used to watching 360 video soon. But if you're comfortable being an early adopter, it is worth the struggle. And by the time the rest of the world catches up, you are going to be an expert.