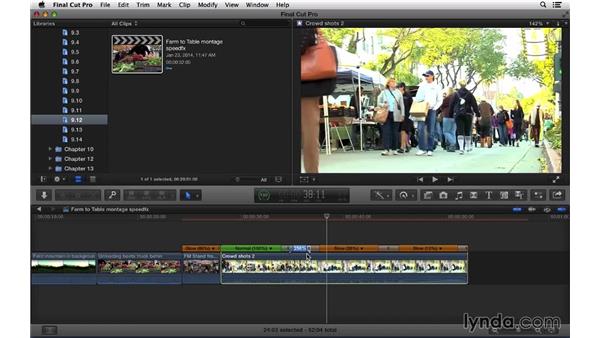 It's sometimes a very useful thing to be able to speed up and slow down your clips for various reasons. Let's take a look at how to do this. So I'm going in to 9.12 and I've a view clips here that I'd like to change the speed for. This one is a pan and it's quite slow, I'm going to play it in real time just you can get a sense of it. So it's very slow. If I check out the duration, control D, it's 17 seconds long. So let's go ahead and speed this up and I think we could probably double the speed and it should still look pretty natural.

So what I'm going to do is just click on the clip and then come to my Re-timing menu. You can also press Cmd+R to get here. And then we have lots of choices here. Just to speed up the entire clip, we're going to go to fast and you have various choices here. I'm going to start off with two times speed, and as you noticed, the clip shortened by half. And that's because it's playing the frames of the clip much faster than real time, double speed, so the clip becomes shorter.

Now there's also this blue bar above the clip. There's a couple of things I can do here. One, I can do the Drop-down menu and sort of switch to a different speed from here, or I can grab these little black bars and drag in and out. And as long as I'm still faster than real time, the bar will remain blue. If I get right on a 100%, it goes green. And then if I go slower than real time, it becomes orange. So let's say we want it to go a little bit faster than double, maybe about 220.

Let's go ahead and take a look. So I think it looks good, it's pretty natural. The sound of the crows in the background sound a little manic. So we'll probably have to remove those and replace it with the, normal sounding crows but visually I'm happy with it. I have another clip down here that I want to slow down. So this is a pan across the farmer's market stand. I'll go ahead and play it. So I just want to slow it down just slightly. Again, I'll click on it. This time, I'll press Cmd+R. My Retiming menu opens up at 100%.

And let's go ahead and just try 86% and play. I think if we sort of took down the audio and use just the visuals it would look okay. So, you've got to see what's really realistic, what will actually work. You might have to experiment a bit. Now, let's examine how to change the speed of a clip variably. So, we'll start out normal and then go really fast and then slow down. So, I'm going to click on this and again, I'm going to go to the Re-timing menu.

And instead of going to slow then fast, I'm going to go to Speed Ramp. It really doesn't matter which one I choose in this case. I'm just going to choose two 0% and as you can see here, we have four different speeds. But each one of these is totally able to be manipulated. So if we're going to start off in real-time, I just want to drag this to 100% and if we play this, this should look just fine in real time. And then, if we want to go super fast, we'll go ahead and just drag this in like so, and then finish off in real time.

Let's go ahead and Zoom in, so that we can get this right and we need to go to 100% here. It also gives me the option of ending on a freeze frame if I just drag this out, and I can have freeze frame last for as long as I want. And then we Shift + Z to get everything in there. And as you can see here, we have variable speeds. I'll go ahead and just play a little bit of it so you can see. Normal, super fast, super slow. The sound adjusts accordingly. So you want to make sure that you fix that.

Now, the one issue with the Speed Ramp is that we have these four sections, and we really don't have a say on what specific part of this clip is a specific speed. So if I undo this, Cmd+Z. So now we're at normal if I want to choose a specific part of the action to be a specific speed, I can. So it's a little bit different than last time. What I'm going to do is switch from the Select tool to the Range Selection tool, and then select the area that I'd like to affect.

So let's say that from here to here, I want it to go super fast, so I'm no longer dictated by those default amounts, I am setting my amount. Then, I can come up to my Retiming menu, and choose my amount, so fast and we'll say four times. And so now this is the section that's going to be affected, and I can drag this in and out as I want. And I could do it again. I can put the Range Selection Tool here, and maybe I want this to be slow.

So this is a great way for you to choose exactly where your variable motion takes place. Go ahead and close my Retiming menus here. Cmd+R. And I'm going to switch back to the Select tool, A. I have the ability to reverse speed. So if I want this pan to go the other way. I can just select it and then go into my Retiming menu and choose Reverse Clip. And now, it's going the other way let me undo that and just a couple of other things. If I come into the Retiming menu, I do want to mention, there is an instant Replay feature.

We really don't have any footage that is conducive to showing instant replays, but basically all you do is you select the frames that you would like repeated and then it automatically repeats them. And then you can either slow down or speed up those frames accordingly. Basically if you have a sports play, and you would like to highlight a specific moment. You would just mark an In and and Out around that moment, and then it would immediately duplicate that footage, and then you could slow it down so that you could highlight a specific action. So that's all instant replay is.

And then I want to talk a little bit about video quality. Now video quality is where I can set the smoothness quality of the Speed Effects. If I choose normal, when I slow down a clip, Final Cut repeats frames which can look a little jerky if you slow it way down. If you choose frame blending, then Final Cut actually includes these small little microdissolves between the frames that you've slowed down, to make a smoother result. It does take a little longer to render, but it's better quality.

And then finally, there's optical flow, which actually creates new pixels by analysing the vectors of movement, and this, of course, takes a long time to Render, but the results are really great. So as you can see there are quite a few creative ways to affect the speed of your clips both constant and variably in Final Cut Pro.