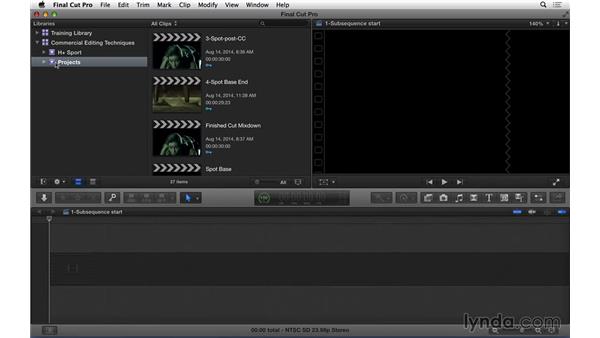 - Hi. This Ashley Kennedy again, and this is the commercial editing techniques with Final Cut Pro 10, 10.1 update. I'd like to do a couple of things in this movie. I want to tell you about this update, because it's quit and unusual type of update, and something we normally don't do on Lynda.com. Then, after I've got you acquainted with what this course is and how it's going to work, I want to show you how to use your exercise files. So, this course was originally recorded in Spring 2013, in Final Cut Pro, Version 10.0.8.

Later that year in December 2013, Apple released Final Cut Pro Version 10.1, which was a bit of a game changer in terms of the way the parts of the interface looked, and the way media management inherently works. So, when this update came out, we rushed to re-record the Final Pro Cut 10 Essential Training, to match the new update, which of course is available in the Lynda.com online training library. However, there are a handful of other smaller Final Cut Pro courses that we were not immediately re-record, for very logistical reasons.

This course is one of those. Now, each of these courses have a lot of really valuable insight in to some great project-based approaches and specific workflows, but well, they recorded in an older version of the software that looks a little different than what you have in front of you. Also, there were big differences in the exercise files. So, what I've done for these courses is sort of put a band-aid on them until we can re-record them from scratch. I've manually updated the exercise files, so that you can use them. I've recorded introductory movies, like this one, to orient you to what's changed.

We're also placing textural overlays within the course, to alert you when something is different in layout or in function. These overlays will act kind of like sign post throughout the course to let you know, when you need to know, when something is changed. More on that in a bit. In this movie though, I'd like to call out a couple of the biggest things that have changed, that you can get an idea of some of the main differences between what you're going to be seeing in this course, and what you'll be seeing in the actual software. When this course was recorded, all projects for the course were stored in this area of the interface down here called the project library.

Well, I'm here to tell you that the project library no longer exists. Also, up here was an area of the interface called the event library. All events, which store your materials were housed here, and each event was shown as residing on a specific hard-drive. Now, that's also changed. Final Cut still stores its materials inside of events, but it's not quiet the same as the event library model. Let's take a look. Okay, so I'm inside of Final Cut Pro 10, Version 10.1.2, where things are looking a little different.

So, up here instead of seeing our various hard-drives connected to our system, each of which house a series of events, instead we see these libraries. Here I have my commercial editing techniques library and a training library. I can have as many libraries as I want, and each can live in its own location. Now, inside of my commercial editing techniques library are two events. We have H plus sport, which contain all of our materials, and we have projects, which contain the projects for the course.

Now, let's come down here. This is where the project library use to reside, which stored all of my projects. Now, instead, this is just the timeline. So, instead, of your projects living down here, again, they live up here inside of an event. Okay, so here's my project event inside of my commercial editing library, and if I want to load any of these projects, I simply double-click. It loads down here in the timeline. Simple enough, right. Well, there are some other differences as well, but we won't be going through them all.

Instead, remember we're going to be placing textual overlays whenever there's a significant change. This is what one of those looks like. So, please, look out for them. Okay, now that that's hopefully all clear, I want to show you how to use the exercise files for this course. For now, I'm going to select my commercial editing techniques library, and close it, and then, I'm going to exit the software. All right. So, if you're a premium member of the Lynda.com online training library, you have access to the exercise files used throughout this title.

The exercise files have been compressed to a zip file. Once you unzip the file, you'll see a folder called exercise files. If you open up this folder, you'll see a file called commercial editing techniques. This files a self-contained library file that holds everything that we need for the course. Now, you can actually place this library file anywhere you wish. Indeed, as a Final Cut Pro 10.1, you have maximum flexibility in this regard, because you can work with these files anywhere. Where as in prior versions of Final Cut Pro 10, you needed to place them in very specific locations.

So, once you've put your library file in the location that you've chosen, you can launch Final Cut Pro 10. If you haven't worked in Final Cut Pro 10 before, the (stopper) will launch with an empty library and an empty event. Right now, I all ready have this library here, this training library, and it all ready has a couple of events in it. To access the library that you need for this course, you just go to file, open library, and here's mine listed here, but yours probably won't be. So, you just go to other, and then locate, and then just navigate to it.

Your library opens quickly, and here we have everything that we need. I'll go ahead a close this library to remove any confusion. Now, we're just looking at our commercial editing techniques library. Inside of it, we have two events. H plus sport, which contains all of the raw materials for our program, and projects, which contain a well-organized structure that you're going to follow throughout the course, chapter by chapter. So, for example, if you're watching Chapter 3, movie 2, you'll just click on 3.2, and work with these project files.

Remember though, when you watch this course, this is what it's going to look like when you're in Chapter 3, movie 2. When you follow along in the software, just make sure that instead, you go to the projects event, Chapter 3 folder, 3.2 collection, and you'll be good to go. One more thing, because this update was recorded in Final Cut Pro, Version 10.1.2, you're gong to need to be on 10.1.2 or later to use these exercise files. If you try to work with a prior version of Final Cut Pro 10, you'll receive an error detailing the problems of trying to access Final Cut materials that are too new.

Fortunately, this isn't a problem. You'll just need to upgrade you version of Final Cut Pro 10 software to the latest version. As long as you have a licenses copy of the software, this is free and easy upgrade. Just go to the apple in the upper-left corner of your desktop and select software update. You'll be taken to the app store, and if Final Cut Pro 10 needs updating, it will appear in the window. You can easily update the software and begin working with the exercise files. Okay. So, that's if you're working with these exercise files, if you don't have access to the Lynda.com exercise files, then you should definitely follow along with your own assets.

10/28/2014
Editing a concise and captivating, effects-driven commercial spot is a challenging and exciting endeavor. Every single moment counts. In this course Ashley Kennedy walks through the process of building a great thirty-second spot, from assessing pre-production materials to delivering to the client, with Final Cut Pro X v10.1.x. She examines the audience for the commercial, the timing and pacing of the rough cut, transitions and effects, and the final details like color correction that make your project look professional. Along the way, Ashley encounters and resolves creative and technical problems editors often face in the real world.

Note: This course was updated to reflect the changes to Final Cut Pro X v. 10.1.x. Although the course was not re-recorded from scratch, we updated the applicable movies by adding text overlays to guide you through existing changes. We also updated the exercise files to work with the most current version of the software. Please watch the "Understanding this update and using the exercise files" movie to learn exactly what to expect from this updated course. Working with an earlier version of Final Cut Pro X? Watch Commercial Editing Techniques with Final Cut Pro X v10.0.9.
Topics include: