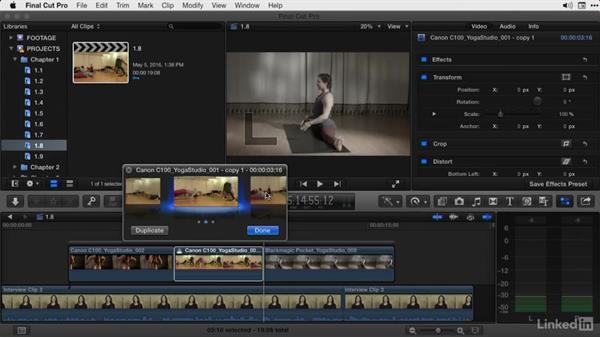 Have a few clips you want to use in a specific place but do not know which one works best with the story? Then Apple Final Cut Pro X’s auditions is for you. How do you use auditions to select the best clip to work with? In this movie, author Nick Harauz demonstrates how to use auditions to figure out which clip works best to tell your story.

- Auditions are a great way to compare several edit decisions in the primary storyline. In this movie we'll create an audition for a series of clips and compare them to see which one is gonna be best. So I wanna move to my 1.8 keyword collection and just double-click the project to open it. And what I have up here is a series of three connected clips, and this middle clip, just to play it back for you, has two actions. So it has them sort of moving away from downward dog, and then up here another yoga move.

Rather than necessarily show both of those moves, I'm debating whether to maybe show just the first part of this clip, the last part of this clip or both. I like to audition all different types of cuts. So let's get that set up. I'm gonna go to the clip menu, I'm gonna choose audition. In this case I want to duplicate the clips, so duplicate as audition. The sign that this clip is actually an audition can be identified by the little spotlight on the top left-hand corner of the clip. And before I go into it I'm just gonna actually select this again, but this time I wanna right-click and choose audition, duplicate as audition again.

So I basically made two copies of my clip and placed them inside the audition. So let's get on to trimming a few of these clips. So I wanna click the spotlight, and I wanna show you that I do indeed have one, two, three copies of my clip and you can see it there updating the timeline. So here's the original, I'm gonna keep it as is. I wanna move on to the second clip and what I like to do is shorten it. So I really just wanted the first part of this action to where they get to this point here. I'm going to drag this clip into the playhead position.

Great. So just clicking on the spotlight again, I've got my original clip, I've now got my trimmed version of that clip. Let me move on to the final clip in the audition. And what I wanna do is just keep the action from about this point to the end. So I'll move my playhead to this point, grab this point with my playhead at that point here, I'm gonna hit shift, x to trim it. So I just wanna show again, we've got some different variations of this.

We've got the first clip, the longest one. We've got the second where I trimmed off the end content. And the third at the beginning. Now the best part of this is using audition, in fact just to show you let me just click the spotlight again and go to the first one. When you're working with audition you can actually cut, or basically move between the clips embedded in the audition by using some modifier keys. If I go to my clip menu and look at audition, just to show you here the options for next pick and previous pick are what allow you to do that.

So that's control, option, right arrow, control, option, left arrow. So just to show this in action I'll move my playhead to this point and just start playing. I'm just gonna have this clip selected. - [Voiceover] Into the yoga class. And so for me in my yoga classes that I teach we start with a very powerful flow of poses that are linked together. And then once I get my students nice and tired. - [Voiceover] So I'm gonna stop that and I'm just gonna move my playhead back and this time I wanna, with that clip selected, hit control, option, right arrow, moves on to the second clip so I can play back and see how that edit works.

7/28/2016
Cutting a video means being able to trim your clips effectively in the timeline. This integral part of the editing process can make or break a production, determining how all of the captured video will play together as a whole. This course covers the tools in Final Cut Pro X that allow you to fine-tune your projects so you can become a trimming master.

Join Nick Harauz as he demonstrates advanced techniques for shortening clips, trimming video, and selecting ranges on clips. He shows you how to extend edits, deal with connected clips, compare cuts, use dynamic trimming, and more. Along the way, he includes shortcut commands, so you can expedite your workflow, driving all your editing from the keyboard. To ensure you're ready to use his tips in the real-world, he wraps up the course by going through two examples, cutting dialogue and cutting documentary footage in the timeline.
Topics include: