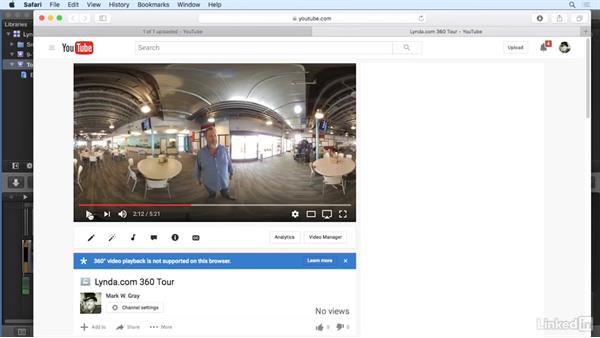 After you've finished editing, exporting, and embedding your 360° video with Google's VR view system called spatial media metadata injector, now it's time to upload and share. Mark reviews all the settings needed on youtube for your video to now be viewed in all 360 degrees. Watching this in 4K and with chrome or the correct browser that supports 360 is best.

- [Instructor] Okay, we've made a 360 video now…and injected the right Kodak.…Now where can people watch it?…Well, YouTube has actually made great strides in 360.…They support all kinds of 360 formats.…We're gonna upload this to YouTube,…just like you would any other video.…Click the YouTube link on my YouTube page.…Then select files to upload.…And we want 360 output, and the injected.…If we upload the non-injected one,…it's gonna appear flat and not spherical.…

And there it goes, uploading.…Now this five-minute video,…we've got pretty fast WiFi here.…This'll take about two minutes to upload.…We can take the word Injected off…because the audience doesn't need to know that.…We're gonna say Lynda.com 360 Tour.…This is where you edit all of your normal stuff…that you have on any other YouTube video.…With your tags and everything else.…You can also upload a custom thumbnail if you want.…This is not really about that,…so we're gonna to leave that alone.…

Very nice fast WiFi here at Lynda.com.…Only a few seconds remaining to get this finished uploading.…