Updating projects and events from previous versions of FCP X 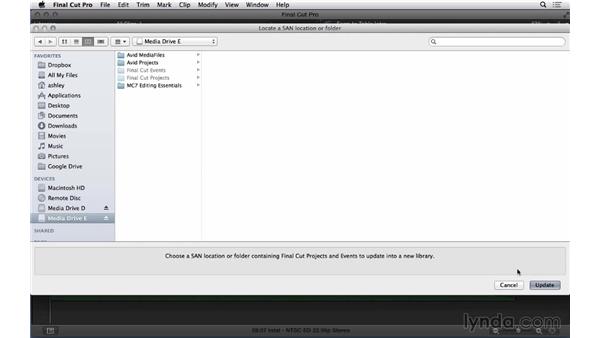 If you've worked in previous versions of Final Cut Pro X prior to 10.1, then you've got old events and projects that you'll need to update for this version. You'll have some choices to make during the update process, so that's what we're going to discuss now. So the first time you update the software and launch Final Cut Pro 10.1, you'll see a prompt that will ask you if you want to update your projects and events to be compatible. Now you've got a couple of options here. You can do all of your updating now, automatically.

You can wait to update it and do it manually later on, or you can locate specific projects and events to update right away. Let's talk about these options. If you choose Update All, then Final Cut is going to search for all connected drives for files that contain a Final Cut Events or Final Cut Projects folder in the appropriate location. When it finds them each hard drive's contents will be consolidated into a new library. It will name each library after the hard drive and all events and projects will be moved into it.

And while events and projects are stored separately within the new library. All files will open at the same time in the library, so this option is kind of a catch all. It'll bring everything forward, but depending on how you like to work, it might consolidate too much into any given library. Since it takes everything from each of your hard drives and puts it together. Now you can always move stuff around afterwards, but you may want to exercise a bit more discretion before performing an update. So in that case, you can also update your projects in events manually by choosing Update Later.

Updating manually allows you to proceed with starting up the software, and then later control exactly which projects and events are brought forward. Or you can choose Locate, which will let you update manually by choosing the drives to target when updating projects and events. So basically, update later is the same as locate, except you'll update from within the software once it's launched. Whereas locate lets you perform the manual update right now, before launching the software. Maybe you're unsure of what to do. Well, the basic rule of thumb is that depending on how many projects and events you begin with from a prior version of Final Cut Pro X, it may make sense to update automatically and reorganize later.

If you have just a couple of projects and events, or it may make sense to update manually and organize yourself from the start if you have a lot of projects and events and don't necessarily need everything updated at once. If you have doubts about what to do, you may want to update manually so that you control exactly how everything happens. Now, a couple of more things about the update process. Final Cut Pro X does not copy media during an update. It moves it and this means that you don't need any additional disk space to perform the update.

Final Cut performs all the necessary media reorganization under the hood. So everything is pretty easy for you. Now that we have a general idea of how this all works, let's take a look at it in practice. So instead of choosing Update All, which again will just go out and find all the final cut events and final cut projects folders on each connective hard drive and automatically make a separate library out of each. I'm going to act as if I chose Update Later so that we can take a look at our option. So, I'm inside the software and it's time to update later.

So to do this, I'm going to go to File and Update Projects and Events. This brings up a dialog box that should look pretty familiar. It again asks if I want to Update All, which is the same Update All that we saw before. Or, it asks us to Locate, which is also the same Locate that we saw before. Because we know what would happen if we chose Update All, which again is to consolidate all final cut projects and events together for each hard drive. Let's choose Locate to manually update selected projects and events.

Okay, so I'm going to navigate to that drive and you don't have to go any further. You just have to choose the drive itself and I'm going to say Update, and here it goes. It's basically bringing in the projects and events and it's going to create a brand new library for them. It is possible that you might have some missing media files and this is just telling you that you're going to need to use that relink files command to relink the offline clips. For right now I'm just going to select OK. There's this dialog box that comes up here. And this is asking me if I want to delete the old projects in advance, or save them. Now I'm going to save them, so that you can see what happens if you do that.

So I'm going to go ahead and save. And you can see that I have my Final Cut Pro X essential training library, which I had before. But now I have this new library, called Media Drive E. And inside there, I have my H plus sport event with all my media. And it also made an event for all of my projects. So, when you do update, it's going to remove all projects into their own event. And you can reorganize later if you want to. This little warning sign is just referring to some of the off-line media that I may have in some of these projects and I will need to go back and fix that later.

So now I can come into my library and start renaming, moving and deleting things as I please. Now I'm going to hide Final Cut for a moment and take a look at the E drive. As you can see, this is the new library. You can't see the project and events unless you right-click and Show Package Contents and then you can see here the Updated Projects and here the Updated Media files. So everything is self contained within there. But I also want to show you that we have this folder here. That's called Media Drive E Old Final Cut Projects and Events.

And what I'd like to do is make a Final Cut Events folder and a Final Cut Projects folder inside of here. And let's go ahead and move the projects that we don't want to promote into these scratch folders. So, let's see. I want to move everything except, Everybody Dance Now, into that Scratch folder. Which I'm going to do, like so. And finish that off, like, here. And same thing here, Everybody Dance Now is right here. So I'm going to move everything else into that Scratch folder.

But it certainly helps to know exactly what's going on when you do it.