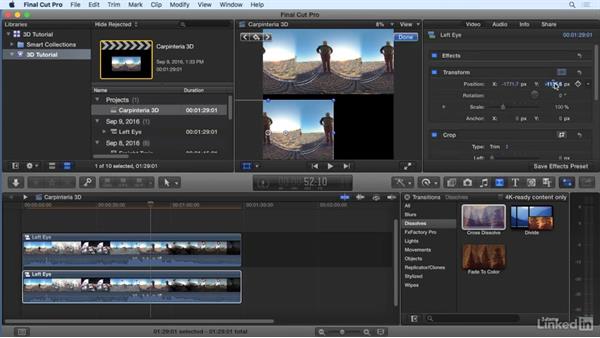 A 3D workflow requires one extra step from the 360° video workflow into 3D. By aligning the eyes and making sure the left and right eye visuals are in different parts of the screen this illusion can be created. Mark walks through each step in achieving this 3D look.

- [Instructor] Okay, I've added or whole show…together here, as if it were a normal spherical video.…I decided to get rid of those blurry dissolve and use…normal dissolves instead,…so you can see what that looks like.…I think it's, you don't have to worry so much…about disorienting people with this 3D format.…Okay, now we've gotta take our flat shot…and make it into a 3D shot.…How are we gonna do that?…Well, first you have to understand what's going on here.…Basically, this middle square that you see on screen,…that's the shot from your left eye.…

And this shot that's split in half,…that's half on this side and half on this side,…is the shot for your right eye, okay?…And you want to be able to separate them.…Put one on the top and one on the bottom, vertically,…because that's how 3D works on light,…you get the left eye image above the right eye image.…Okay, so the first thing I'm gonna do…is take our entire timeline here, select it all,…we're gonna make a compound clip.…So I'll hit the control key and click it,…