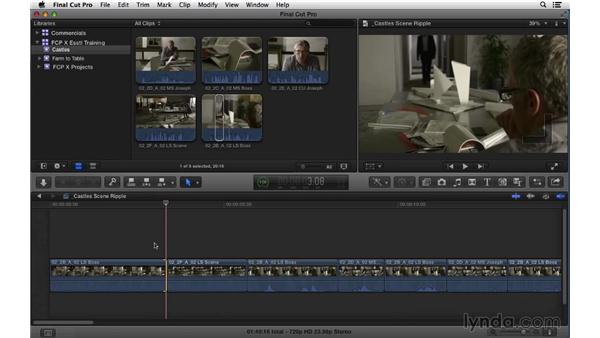 Getting the right material in the timeline, in the right order is certainly on part of the story. Truly, anyone can edit in that sense because honestly the mechanics of editing are not that difficult. The real art of editing comes in the trimming process, one frame at a time. So, in this chapter on Trimming, we are going to jump over to our another project which is a dialog scene from the film, Castles. I'm going to pop into 4.1 here and right now keep in mind this is a very basic rough cut, it still needs some work.

So let's play the first part of the sequence, so we can get some context on what we're editing. >> So, how's the coffee? >> It's cold. >> Did you finish it? >> You know, I'm taking a big risk putting you on this Columbia project, the firm could be on the line here. 6:00 p.m tonight. Simple deadline, meet it. >> That's it? 6:00 p.m. Huh? >> Okay, I'm going to stop there for now, so the shots are laid in but we've got some pretty glaring timing and pacing issues.

Also just so you know, this is the second scene in the film. And it's job is to setup the problem, which is that Joseph, the Architect, is in some trouble. He's on a serious deadline to come up with an idea for a building design. So there's got to be some tension here between these two men. We need to use timing and pacing to help tell this story. Now where exactly do we start? Well, we need to watch each and every edit very closely. We need to take a look at each of the transitions in the sequence and ask ourselves, does this edit need to be changed? Do we need to add frames or subtract frames? And to do this, we're going to use the Ripple Tool.

And just real quick, it's easy enough to figure out how we subtract frames. But how exactly do we add them? Well, that goes back to when we were selecting the in and out points for the clips in our sequence. Let me show you. I'm just going to Select this Clip and Right Click and choose Reveal in Event Browser. And as you can see, this selection right here matches with this selection right here. So this is the In and out points. And we have all of the frames to the left of the end point, and all of the frames to the right of the out point that are still available to me during the trimming process.

This extra material is called Handle. So we're going to use that a lot while we trim. So let's start at the beginning and work our way forward. So I'm just going to park on the first edit here and Cmd+plus, plus to sort of Zoom in. And first because I want to watch this edit, I'm going to use the play around command. If you take a look up here in View Playback Play Around is Shift+question mark. So it's going to play a certain number of seconds before, and a certain number of seconds after this edit.

This is called Pre-role and Post-role, and to determine those settings you can go to Final Cut Pro > Preferences, and then under Playback, Pre-role and Post-role duration, we're going to be going two seconds before and two seconds after. So I'm going to press Shift+question mark, and let's see what we think about this edit. So what do we think? Now I recommend we take it one side at a time. We're going to start with the A side of the edit, and then move to the B side of the edit. And as far as this edit goes, I think we need to try to match on action so that Joseph boss walks continuously through this edit.

Right now, it's not very fluid. So, I'm just going to select the A side and I'll perform a basic ripple trim. Now, I can do this one of two ways. I could just grab the edit and move it like so or if I want to use the keyboard I just want to make sure the side is selected. And then just use the comma and period keys. I press comma to trim one frame to the left. And period to trim one frame to the right. Again, because I'm always stressing keyboard editing, I'm going to use the keyboard commands. So, I think I'm going to let out the edit by using the period key to trim to the right, so that he walks a little bit further into the space.

Alright, I'm going to stop there for now. Now I'm going to jump over to the B side, so I'll select the B side of the edit, and we want to make sure that we see him coming into the frame right there. So I'll probably be trimming all of this away. So I'll press Period to take away frames and let's go ahead and play around the edit. So, I'll just press Shift+question mark. >> So. >> That's much more fluid, it's matching on action. I think I like it.

Alright, let's move on to the next edit. I am just going to go ahead and select it and press Shift+question mark. We got some problems there. He's still walking here, and he's standing still there. Let's try to do the same thing, let's try to match on action. This time, I'm just going to drag to kind of see what I've got and notice that when I drag, I see two monitors. What I'm seeing are the last frame on the A side clip, and the first frame on the B side clip. Now, if you don't see this, then again, you need to come up to FinalCut Pro. Preferences, and then under editing you need to choose Show Detail trimming feedback.

If you have this unchecked you're not going to get those two monitors. Let's go ahead and make sure that he is still moving on the A side, and you can kind of see that I've got about the right moment there. And let's drag over here and make that it still moving in this shot. It's got the forward momentum. Many times editors try to match on action like this, it really tends to hide the edit. So, I am going to play around the edit. Let's go ahead and press Shirt + question mark. Well, I think that the forward momentum works, it does help hide the edit.

This is quite short let's just check. Ctrl+D. It's a little over a second long, but I do like that it sort of sets up the space between the two men. And I'm going to leave it there for now. But that is something that I might let out and make longer in a second pass on my trimming. This also opens up quite a few seconds before he starts talking, but I think it really works because we have this tension between the two men that we need to show. So I'm just going to play here and into the next edit and see what I think. >> So, how's the coffee? >> It's cold.

>> Did you? >> So I do think that this works pretty well. Let's go to this one though. He answers much too quickly for the tension that's in the scene. So let's go ahead and play around this edit and see what we think. >> How's the coffee. >> It's cold. >> He really can't even look at his boss until this moment, I think we need to stress that. So, let's just go ahead and just let out some frames on the B side to increase the tension here and see what we think. So, I am just going to press the Comma key to Trim to the left. He still can't look at him. He can't still can't look at him and I think maybe about right there.

I'm going to play around the edit Shift+question mark. >> INAUDIBLE, how's the coffee? >> It's cold. >> How's the? >> Maybe a couple more frames. Okay, let's see if we like it. >> How's the coffee? >> It's. >> Very good and if I wanted to include his entire line there, I could go up to Final Cut Preferences and increase my Post Roll. But I think that's pretty good. So I'm going to continue on in this manner, going from transition to transition. Watching making sure the A side is looking good making sure the B side is looking good, and then playing it and watching again, and remember we're using the timing, and spacing to speak to the scene's mood and intention.

Then once I get through each and every edit in a scene I'm going to watch the whole thing again and make sure that I'm happy with my decisions. Trimming is so much about relying on your instincts so take your time, and make sure you do this part well. It's truly a thing that sets great editors apart from the rest.