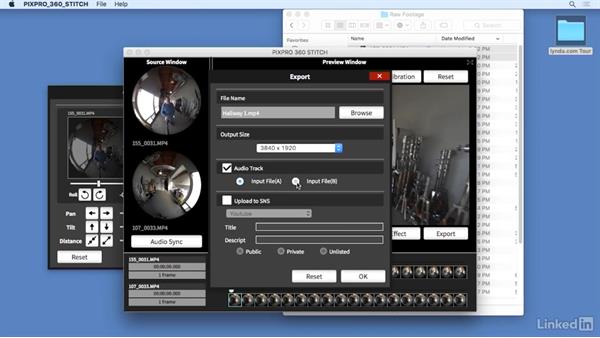 Next in your timeline is stitching your pairs. The Kodak software that comes with the the Kodak SP360 4K Dual Pro Pack Kit will get you set up with stitching the movies. Mark walks you through ingestion, stitching, as well as where to set in points and out points and how to save the clips. Stitching 360 spherical video is the first step in getting the footage in the correct format for editing on a variety of editing software.

- [Instructor] In this video,…we're going to learn how to stitch our shots together…into spherical videos that we can edit in Final Cut Pro,…or any other non-linear editing software.…They come out of the camera looking like this.…Round shots.…And we've paired them up using the time,…as you saw in the last video.…To stitch them, we drag them…into the PIXPRO Stitch software.…Now there are two different piece of PIXPRO software…that you can download at the PIXPRO site.…This blue one is only for operating the camera,…and remote viewing via USB or WiFi.…

You want to make sure to use the red one…that says Stitch on it.…That's for stitching.…Now this is relatively new, kind of buggy software.…So always be sure to check the website…and download the very latest version.…Now to stitch a pair of shots together,…all we do is drag them in to the source window.…And then we click OK, to acknowledge…that those are the right two files.…Now, if you remember the last video,…I went to great lengths to show you how…the blue was going to be the front camera,…