Shooting in the field 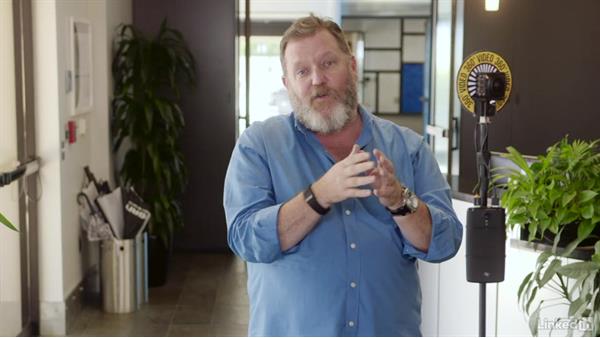 In the last video, we set our whole rig up, so now shooting with it is pretty straight forward. Since we can’t really use lights or other film equipment without them being in the shot, our setup is necessarily simple. Mark takes you through the process of shooting 360° video in the field and what that means. He reviews where the 360° video stitch is and how that affects what the viewer is seeing and the person on the camera walking through it.

- For demonstration purposes we're gonna shoot…a little 360 tour of Lynda.com studios…here in beautiful Carpinteria, California.…To see the final video, just follow…the link in the course description.…You can pan around on your browser or your smartphone,…but for the most immersive experience,…be sure to watch it in a Google Cardboard…or other head-mounted display.…Now in the last video, we set up our whole rig,…so now shooting with it is pretty straightforward.…Since we can't really use lights or other film equipment…without them being in the shot,…our setup is necessarily simple.…

For this 360 tour I want to simulate the experience…of visiting Lynda.com as an author,…so we're starting here in the main lobby.…I'm gonna put the camera here…at about eye level in the middle of the room.…Now you might think that because it's 360,…it doesn't matter which direction it's pointing,…but it actually does, for one thing,…I want to choose what the viewer sees first…in the default forward position, so I have my number one…

Video: Shooting in the field