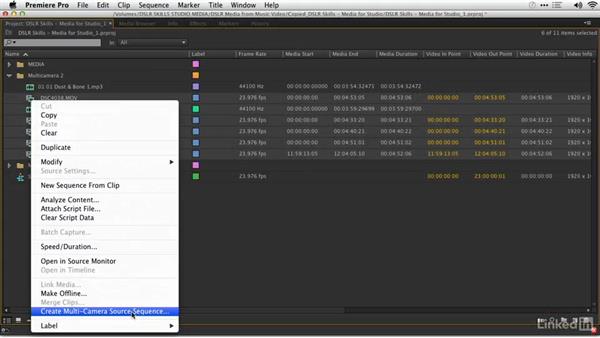 - Hi, my name's Rich Harrington. - And I'm Robbie Carman. - And welcome to this week's episode of DSLR Video Tips. We're gonna explore the multi-camera process, and in this week, we're gonna use Adobe Premiere Pro to cut together the multi-camera footage, and if you're not a Premiere Pro editor, don't worry. We'll be using Final Cut 10 next week. If you're not gonna be covered by one of those two apps, it's okay, the process is not that hard once you understand it. I think you'll be able to do it pretty easily. - [Robbie] Absolutely. And Premier Pro actually has had, recently has had a revamped multi-camera interface that allows us to work much quicker and much more efficiently than in previous versions.

- Yeah, and they even make the syncing process. So we're gonna use Premiere Pro Creative Cloud, which is the brand new version. If you're using an older version, it's almost the same. The big thing that's gonna be missing is syncing on audio, so you'll have to use a marker to sync. We've talked about using syncs and markers in earlier episodes when we explored sync sound. So there's really three main steps to pulling off a multi-camera edit. You need to organize the footage. You need to sync the footage. Then you need to edit the footage.

And of course, Rob, after you've done the initial edit, you're gonna do some of the core editing skills you used, right? - Yeah, you're gonna refine things, do trimming, tweaking audio, adding graphics, and just, in general, finishing up the piece. - Maybe some color correction. - Color correction, some audio mixing, that kid of stuff. - Yeah, you're definitely gonna see this. When you've got multiple angles, no matter how hard you try to end the field to match those cameras, unless they're all the same manufacturer and the exact same model of camera, you may see some subtle variations that you'll wanna even out. - That's true. - Alright, so when we come back we're gonna start the process by getting our footage organized.