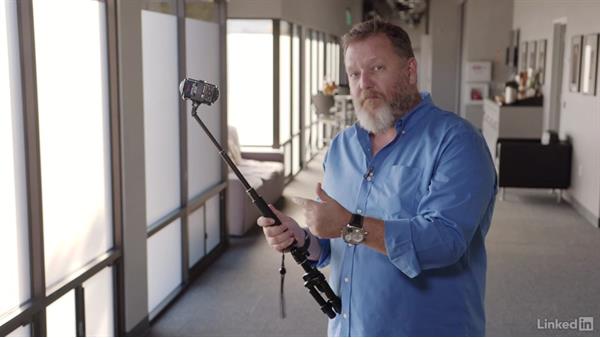 So, we’ve covered shooting from a stationary position, with the camera on a stand. But what if we want to MOVE the camera through a space. Remember, the camera still takes the place of a person who can look in any direction. And if they’re watching with virtual reality goggles, too much movement can actually cause motion sickness. Mark demonstrates the best ways to shoot with movement and how that also affects the viewer.

- Okay, we've covered shooting from a stationary position…with the camera on a stand, a mic stand or a monopod,…but what if we want to move the camera through space?…Remember, the camera still takes the place of a person…who can look in any direction.…And if they're watching with virtual reality goggles,…too much movement can actually cause motion sickness.…So we want to take care to keep it smooth and level.…You don't need to pan the camera around because…the viewer can look in any direction they want.…You do want to consider the experience of the viewer…and keep elements you want them to see in an area…of the sphere where you expect them to be looking.…

Now like I said in an earlier chapter,…you want to designate one camera as your front camera…and set its clock a few seconds ahead of the other one.…You can always switch them later on in post,…but be conscious of where your default front is…of your sphere while you're shooting can be…very helpful later on.…To show you what it's like to move through…the halls of the la.com studios,…