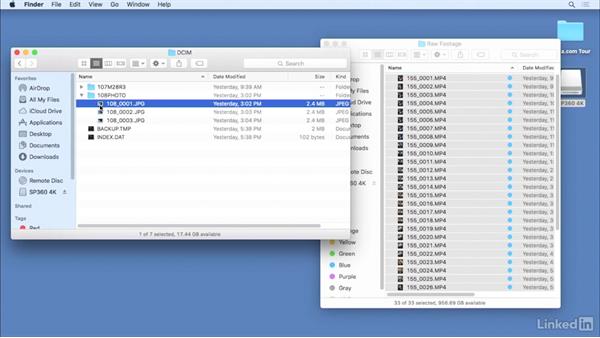 In the 360° video workflow importing the project is much like any other media you'd ingest. Mark goes over the specific ways to do this to help you in the process of stitching and editing the videos by highlighting the separate cameras with tags in different colors and sorting your footage by time shot to match up your pairs perfectly.

- [Instructor] Well, we finished shooting…our 360 walkthrough of lynda.com studios,…now we're gonna learn how to do the post-production.…Now to get the files off the cameras…you can either attach a USB cable…and plug that straight into your computer…or take the microSD card out,…put it in a card reader,…and stick that card into a bigger card reader.…That's how I like to do it, the adapter.…And either way it'll pop up just like this…on your Desktop.…

Now this is card number one,…'cause you notice I labeled my cameras one and two…and my cards one and two.…So here in card number one we have this file structure.…Now most of this you could ignore,…but this one with the number 155 et cetera,…that means this is camera 155.…That's the serial number that the software…gives the camera for this incarnation of shots.…And we can actually preview some of them,…if we click on them we can hit the Spacebar…and we can see what's on each of these shots.…

With the arrows we can look down…and browse all of our different shots.…If you'd like to follow along…