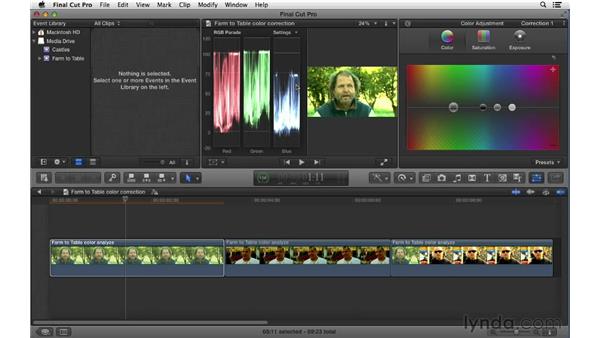 Now that we have identified what needs to be done to each of our images, we are going to go step-by-step through a basic color correction workflow. This workflow has been broken down into three basic parts, and you can use this formula whenever you approach basic color correction. I'm going in to 10.2, and as you can see, we have the same images that we saw in the previous movie. I am going to select the first image here, and then I am going to open up the Inspector, Cmd+4, and there is no need to apply a color correction effect eclipse in Final Cut Pro X, color correction is yet another built-in effect.

So let's take a look at the Color category here at the top. We will get into all of these items a little bit later, but for right now let's come to Correction 1. This is indeed the first of any number of corrections I can apply to my clip. I recommend, however, that the first correction that you apply to a clip is the basic correction that we are about to go through. So I'm simply going to click on in this arrow right here and my Color Board opens. Now first controls that you should use are the Exposure controls, so I'll click up here, and let's take a look here.

And we are a little bit crunched on space here, the resolution that I'm recording this movie at is causing this problem, but you'll probably be working at a much higher resolution so you will probably be able to see all of these windows just fine. In this configuration I'm not even allowed to really drag this over any further to the left, so bear with me here just a little bit, we'll be fine. Let's go ahead and make sure that the Luma waveform monitor is showing, so Waveform and Luma, looks good here.

And let's take a look at how to read this. Now this Video Scope captures the light and dark values of the image without measuring the Chroma or color values. Zero represents video black and 100 represents video white, so let's go ahead and change this to Fit so we can see the entire image, and we will make just a little bit of room there. And before we make our first adjustment I just want to call out one thing about the relationship between our Waveform and our image.

So that's how we are going to look at it. So the first thing I am going to do is take my Setup control and drag down, and you notice that the image changes live and the waveform approaches zero. So we don't want to go below zero, but I'm going to approach zero, so we have the very darkest parts of our image right there at video black. You can see that it's already improved a lot. And then we do the same thing with our Gain knob, I am going to just drag this up, and again I don't want to go above a hundred but I want to approach 100.

And you can see that by opening up our Contrast scale, this is already so much better. Then you come to your Gamma, and you can either lighten it up a little bit or darken it up a little bit. And I think I am just going to bring it slightly below the middle, and I think I like that. So that's step one and usually this helps out a lot. Now let's move to step two which is where we correct color balance problems. I'm going to move from the Exposure controls to the Color controls, and I'm in a switch from the Luma waveform monitor to the RGB Parade waveform monitor.

The RGB Parade breaks the signal out into the red, green and blue color signals. So usually our aim here is to balance the image across these three color channels specifically in the areas that should be color neutral which are the blacks and the whites. So it looks like our image is pretty well balanced between the red and green channels, but we are a little low in blue. So let's go ahead and take our Highlight knob and drag up in blue, and you can see the channels adjust accordingly.

Also look at the image, it's cooling everything off. So that yellow color cast that we had over the entire image is going away. And I can take my Shadows knob and come over to the blues and just start to tweak it just a little bit. And what I am going to do really briefly is just come back over to Luma controls, because sometimes when you adjust your color channels it affects the Luma and in this case you can see that it did. So it's kind of like a dance. I am going to come back over to Exposure and just bring up my Exposure just a little bit more, and then I'll come back over to RGB Parade and everything is looking good still.

So you might have to go back and forth a little bit there, but already looking a lot better. And finally, the last part of the process is checking your saturation. So I'm going to click on Saturation here, and then we are going to switch from the RGB Parade to the Vectorscope. Now to Vectorscope is the one video scope we have seen so far that only measures Chroma or color values without taking into account the Luma signal. It measures values around the color wheel, starting here, red, magenta, blue, cyan, green and yellow.

So if you notice our image here we have got Chroma values residing in the red but mostly yellow and green area, and we have also got some blue here. And also notice this line right here, this is called the Flesh Tone line where you should try to get the flesh tones in your image to reside. So, as you can see, we do have our flesh tones here, and we also have our yellow here which is mostly the background, and we have our blue here which is his shirt. So I think the flesh tones could probably be saturated a little bit more, usually I like to have the flesh tones reside about a third of the way from the center of the Vectorscope out to the edge.

So let's just take a Midtone control, so we are only affecting the saturation of our midtones and drag up. You can see the Vectorscope adjusts accordingly, you don't want to go too much or it turns orange. But let's just give him a nice healthy skin color here. I think I like that. I am going to come over to the Global control and just see what riding this up and down does to the image. I think I am not going to do too much to that. So now let's go back to the main Inspector window by clicking on this arrow here.

Let's take a look at our before and after. I'm going to hide my Video Scope so that we can get a little bit more real estate here. So this is after, and this is before, big difference isn't it? So now we are going to thorough this entire workflow that we have just done, but quickly on this image, you can see how quickly this can be done. So we are going to select this image, we are going to go into Correction 1. I am going to first go to Exposure controls and make sure that we show the Video Scopes for the Luma waveform.

We're going to bring our lightest parts of the image up, and we are also going to bring the darkest parts to the image up so that we are between 0 and 100. I am going to just ride my Gamma to see kind of if I want to darken or lighten it. So I think I'll probably be right around here. Next we are going to switch to the RGB Parade and then come over to Color, and we are little bit weighted towards red.

Let's take our Highlight control, go to red and just bring it down just slightly. I also want to come down here to my dark values and adjust my blues just a little bit. So I am going to take my dark value go over to the blues and raise them up just a little bit. And now I'm going to the Vectorscope and Saturation, and you can see that we definitely have a pretty saturated image. If I ride the Global controls up and down, I'll probably just bring everything down slightly here, and then I'll come over to my Midtones and maybe just have the midtones up a little bit, but then over all down, so I think that will work well.

So let's go ahead and take a look at before and after, Hide Video Scopes. So this is after, and this is before. So we could probably do a little bit more tweaking here, but you can see that we have brought out some detail in the shadows, he doesn't look so red and so dark, and our contrast is a lot better. So, as you can see, there is a certain workflow you should take in correcting your images, but as you do it again and again you'll get faster and more efficient, and it will become second nature.

3/14/2013
Learn how to build and refine your story with the redesigned editing toolset in Final Cut Pro X. In this course, author Ashley Kennedy focuses on getting you comfortable with each aspect of the editing process in Final Cut—from preparation and organization, to editing and refining, to audio and effects, to media management and exporting. Each stage of the postproduction workflow is explained thoroughly and concisely, and uses real-world examples from both narrative and documentary workflows.

Q: Why are the exercise files not working, and why does my interface look different than the one in this course?