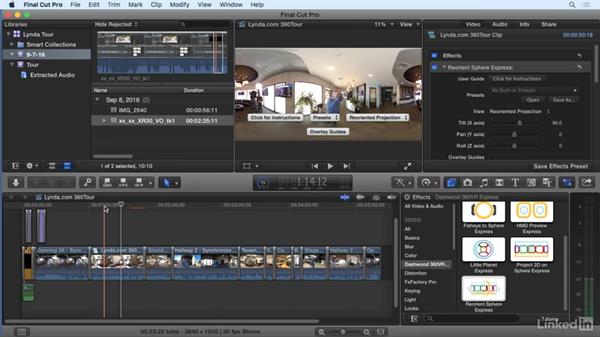 Once you've assembled your footage on the timeline Mark goes through the subtle ways you can edit titles, transitions, and stitches. Adding transitions, effects, and titles can help your 360 video shine. He then shows you how to properly export this footage using 4K settings that will work the best with Google's YouTube viewer system.

- [Narrator] Okay, a little time has gone by.…And I have edited our tour together,…as you can see in the timeline.…All of our different shots, nice and linked together.…Along with a nice little heading at the beginning, here.…I wanna call attention to the transitions between the shots.…If you do straight cuts in Virtual Reality,…sometimes it can be a little bit jarring for people.…But what I've done is a dissolve.…Let me show you what that looks like.…- [Man Off Screen] It good. Action.…

- [Narrator] Now those transitions are very easy…to find in Final Cut Pro.…They're in the blur category of transitions.…If you take a little preview here,…there's the Directional blur, the Gaussian blur,…that makes things real super blurry.…The Radial blur that kind of gives you that Scooby Doo spin.…Those all seem kind of disorienting,…especially that one is gonna get real distorted…going around your virtual reality sphere.…I just use the simple blur transition, like that.…What that does, things go out…of focus while it's dissolving.…