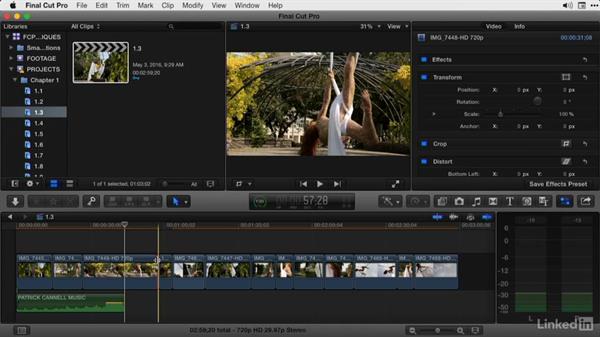 - Extend edits is a great way to extend a selected edit point to your playhead position. It can be considered an alternative way to roll clips as well. It can also extend the out point of a clip if it were the last one in your project. While the word extend can be deceiving, extend will also shorten clips if you move your playhead earlier in the project. Let's take a look at how we can use this. So I'm gonna go to my 1.3 keyword collection, and double click the 1.3 project to open it.

In the last few movies, we've been performing trimming operations by using our keyboard shortcut. Whether to trim the start or the end of a clip, or trim to playhead where we have the choice of whatever is closer to our playhead. In this movie we're focused on extend edit, which involves us to select basically either the in point or out point of a clip for it to work. So let me give you an example here. Let's say this third clip in my project, I want to trim so that it ends right where the music ends.

I'm gonna position my playhead right there to the end of the clip. And I'm gonna select the out point of this clip, so you can see there that it's selected, and keep in mind whenever you see red, this is just a great indicator to let you know that there are no handles on this clip so I can't actually extend this more 'cause there's no content available to the right. But in this case, I want to take this out point and actually extend it to the playhead. So as long as that's selected and I hit Shift + X, notice how the out point moves to the playhead position.

So it's a really handy tool that you can use where you could, let's try this again, I'll move my playhead here. I'll select the in point of the clip this time, and I want to hit Shift, and with my playhead there, I'm gonna hit Shift + X, just to show you what happened in that case, I just undid by hitting Command + Z. That's me redoing that command with the Shift + X, it moving to the playhead position. So this is a great feature for you to extend edits, I'll give you another example of how you could use this.

Let's say that you had, maybe a piece of audio in your project and you just wanted to extend it out a lot longer, you could move your playhead, select a clip, and then, by hitting Shift + X, have it move to the playhead position. Just to let you know, that clip didn't have enough handles to move to this point but that's okay, I'll just move my playhead a little bit earlier to show this to you. And now I'm gonna hit Shift + X to move it to that playhead position. So, one of these things, if you're extending the length of clips, we always want to be aware if our clip has handles or not.

If it doesn't have handles, we could run into some problems in trimming situations.

7/28/2016
Cutting a video means being able to trim your clips effectively in the timeline. This integral part of the editing process can make or break a production, determining how all of the captured video will play together as a whole. This course covers the tools in Final Cut Pro X that allow you to fine-tune your projects so you can become a trimming master.

Join Nick Harauz as he demonstrates advanced techniques for shortening clips, trimming video, and selecting ranges on clips. He shows you how to extend edits, deal with connected clips, compare cuts, use dynamic trimming, and more. Along the way, he includes shortcut commands, so you can expedite your workflow, driving all your editing from the keyboard. To ensure you're ready to use his tips in the real-world, he wraps up the course by going through two examples, cutting dialogue and cutting documentary footage in the timeline.
Topics include: