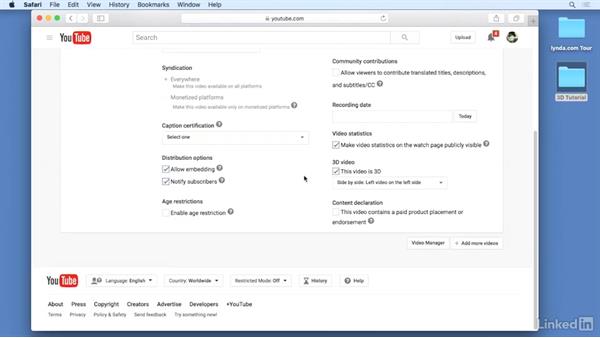 Once the video is done exporting you need to embed the video with Google's VR view system. This injects the media with the correct data for YouTube to understand how this video is to be viewed in their viewer. The embedding program is called Spatial Media Metadata Injector and Mark explains where to find it, download it, and how to use it.

- [Instructor] Alright, Compressor has finished its work.…Let's take a look at what we got here in our Output folder.…There it is.…Now, it looks all stretched out now.…You might think, well, that's not right.…I don't want that all stretched out.…Don't worry.…This will give it the maximum amount of pixels…that it can have.…So it's gonna have the best chance of being super sharp…when it's on YouTube.…Don't worry about the stretch.…It'll be corrected in the viewer.…

Okay, we need to inject the right codec into it…to let viewers know that it's spherical…and that it's 3D.…So again, we use our Spatial Media Metadata Injector here.…We're gonna open a file in our 3D Tutorial.…There's our Output.…That's my file and my video is spherical, yes.…My video is stereoscopic 3D top/bottom layout.…Yes, that is very important to check…that little box right there.…We're still not doing spatial audio so you can ignore that.…

You wanna inject metadata.…We can name it anything we like…but it conveniently adds the word Injected…and puts it back in the same folder with its father.…