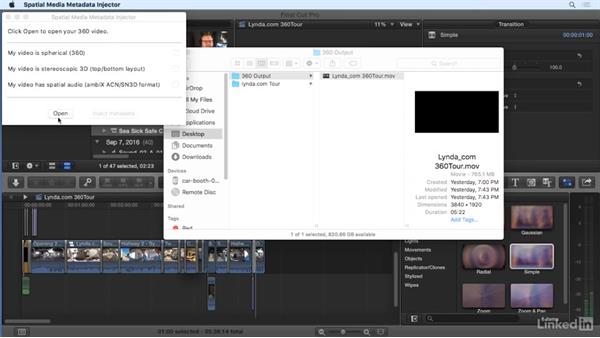 Once the video is done exporting you need to embed the video with Google's VR view system. This injects the media with the correct data for YouTube to understand how this video is to be viewed in their viewer. The embedding program is called Spatial Media Metadata Injector and Mark explains where to find it, download it, and how to use it.

- [Instructor] Alright that took 52 minutes.…But now in our 360 Output folder there it is.…Lynda_com360Tour.mov…Which we can open up and play.…- Look at what it feels like to...…- [Instructor] And this is how it looks.…I'll turn the sound off.…This is how it looks.…We can look all the way around.…We can see the tops and bottoms of everything.…Now, if we take this video as it is…and upload it to YouTube…or try to watch it on any kind of VR player,…it will not look right.…

It'll just look like this,…which is not what we want.…It'll just look big and square.…We need to give it the Kodak…so that everything knows how it works.…And to do that,…we use this piece of software:…Spatial Media Metadata Injector.…This is a free piece of software from Google…that you can download on their website.…There's a link in the description here where you can find it…but if you have trouble any time,…just type into Google: Google 360 Kodak,…and you'll get right to it,…plus some other valuable information.…