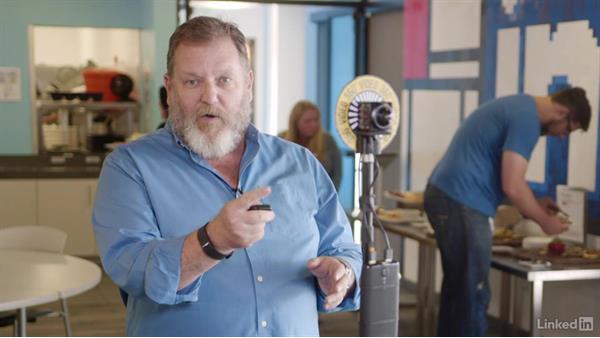 These cameras, like pretty much all video cameras, do record sound. And since each one has 4 tiny microphones, the quality is not that bad, but it’s still not as good as you’ll get from a separate sound recorder. Where you put the mic has a lot to do with what you want to hear. One great option is to put an omnidirectional sound recorder at the same location as the camera. Mark reviews the pros and cons of shooting sound with 360° video.

- Okay, let's talk about sound.…Now, these cameras like all video cameras, record sound.…And it has four little microphones on each camera…so the sound quality's actually pretty good.…But still not as good as you're gonna get…from a separate sound recorder.…Now where you put the sound recorder…has a lot to do with what you want to hear.…One great option is to put an omni-directional…sound recorder at the same location as the camera.…A tiny one, like a Zoom H2 can even fit on top…with some velcro maybe.…Or you could hang a Zoom H6 with it's…omni-directional dome attachment underneath.…

There's a significant blind spot between the cameras…to hide these in.…You can adjust how the shots stitch together…in post as well to help hide them even more.…Now, in our current situation,…we really want to be able to hear my voice…above the noise of this cafeteria.…So, I'm wearing a radio mic that's feeding it…to a sound recorder that's hidden behind the A camera.…Now, just like with any double system sound recorder,…once the recorders are going…