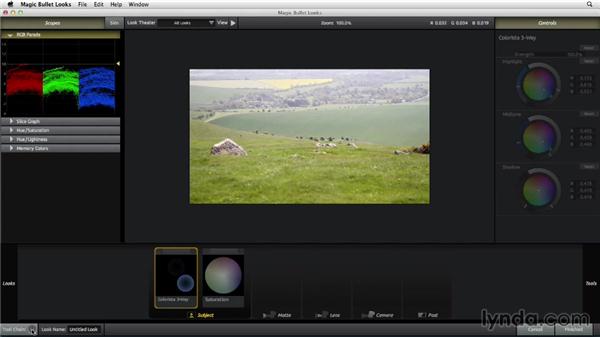 Join Simon Walker for an in-depth discussion in this video Creating an early morning look, part of Color Correction: Color Grading for Locations and Times of Day.

It's quite common that you'll actually need to change the time of day to be a different time that you actually shot your footage shot. There are a number of core concepts involved when you're changing the time of day. But the key to interpreting colors to great shots for certain times of day is observation. You can see for yourself, if you watch how the light changes from before dawn til after daybreak. Or from midday to into the afternoon, or even at night just before sunset and after sunset.

It's very useful to be able to stand outside and just physically watch how the colors are changing. What the shadows are doing, how dark they are how bright they are. And it's this method of observation that will really help you when you are doing color correction for different times of day. This shot was filmed late morning towards lunch time. And so obviously doesn't look like the early morning. So what corrections can we add to this to make it seem like early morning? Let's open up the Looks folder. One of the core concepts for changing the time of day is this slider, the Midtone slider.

You can reliably simulate light changing, ambient light changing during the day by adjusting this control. So in early morning, the ambient light is much lower. Also crutially the shadows are much darker. The shadows are very dark in the early morning. The highlights are less in the morning too but they key control is the mid-tone. You're probably noticing something looking slightly incorrect here, and that's the saturation.

Saturation doesn't look like this in low light situations. Our eyes are designed to see detail first, and colors second especially in low light situations. So to simulate this we can add a Saturation tool and desaturate the light. The other component of early morning light is how blue it is. Its surprising how blue light is just before dawn. This is partly due to the actual color of light itself.

Which we can replicate by moving the highlights over towards blue and it's also something to do with the way our eyes see light. In low light situations, it easiest to see light with the shortest wavelength, which is blue. So to simulate this you can also move the blue mid-tone, or the mid-tone correction towards blue. This combination of corrections now is looking much more like early morning. Here's the before and after. Then the original shot but there is another key element to involving this particular shot because there's too much light coming from above. This was filmed in a part of the day where the ambient light is very bright. So in a shot like this what I need to do is darken the top of the frame. I can do this with the Gradient Exposure tool in looks by dropping down the Exposure by a couple of stops.

And then adjusting the on screen controls, just to suit how much light is coming from the top of the frame. I might drop this down a little more actually. I don't want to darken it so much it's sterilized but I just want to adjust for how much light appears at the top of the frame. Which wouldn't be happening at this time of day. So this correction was to much, maybe around two and half, something like that. And then I can stretch and drag down the gradient according to what I think suits this shot. So actually these corrections are quite simple.

Remember to desaturate, because this is a low light situation. Move your Mid tone slider down to emulate the lack of ambient light. Move your highlight control towards blue, to simulate the actual color of light. And then use your Midtone Color wheel to adjust for the fact that we see more blue in low light situations. However, it doesn't stay this dark during the morning for long. The lighter it gets, the less blue the light appears. And the lighter it gets, the more ambient light is present in the day, then the less dark the shadows are.

So this would be a grade for first thing early morning, just before dawn. And as the day goes on, as the sun begins to rise, you'll have an increase in ambient light. The shadows won't be quite as dark. The gradient exposure won't be as necessary, so I can bring that down or rather bring it up couple of stops. And also the saturation won't be quite as desaturated, so you can increase the saturation here.

So this correction is probably around about 20 minutes later than the previous one. It's certainly later in time, because the light has increased and the saturation has increased. And this is sort of changing light you need to keep an eye on. One last thing though, you'll notice that the channels in the RGB parade have a very low setting in them. And this is natural. You don't have to stretch your contrast right from zero up to 100 on every shot. So the lower levels, in your RGB parade would be right, because they would simulate the lower light that you'd have at this time in the morning. 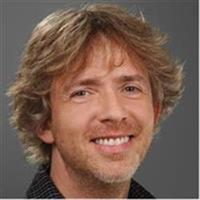 7/3/2013
Color is a powerful signal in video; it can subtly project emotion, mood, time of day, and location. Learn to manipulate these visual elements in a variety of shots, from interior spaces to outside landscapes, with color grading. Filmmaker, colorist, and experienced editor Simon Walker shows how to simulate a light source and different types of light, and choose an evocative color for your footage to tell the story of a particular location. Plus, learn techniques to change the time of day, the type of room, and the overall mood of a location.

Simon works with Adobe Premiere Pro and the Magic Bullet Colorista II and Looks plugins, but these lessons can be applied to any color correction workflow.
Topics include:

Q: Do I need any plug-ins or additional software to perform the color grading work shown in this course?

A: This course demonstrates techniques that will work in any color grading software, including the built-in 3-way color corrector tools in Premiere Pro, Final Cut Pro, and Avid Media Composer.  However, the author uses some plug-ins for Premiere Pro in this course.  While you can still get similar results with other tools, you may wish to try the same tools used in the course.  If so, you can install Colorista II and Looks by Magic Bullet.  There are free trial versions of these plug-ins available at the Red Giant website at https://www.redgiant.com/downloads/trial-versions/registration/magic-bullet-colorista-ii/.