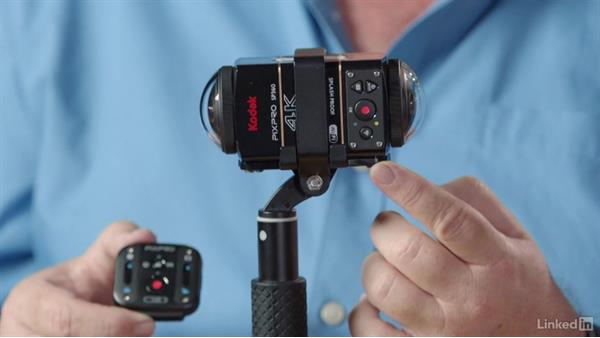 Setting up your camera or cameras for 360° video is often a bit of a task. Mark overviews the many different types of 360° video cameras available to you, specifically the the Kodak SP360 4K Dual Pro Pack Kit. Mark shows where the start buttons are, his special 3D printed stands, and how to arrange the 360° video cameras for best recording.

- On this tutorial, we will be working with the Kodak PixPro SP360 4K dual pro pack camera. This kit comes with two cameras, a remote, and a variety of mounting equipment. The main amounting set a provided is this selfie stick system. It securely holds both cameras at the end of this telescoping rod. This is great for those situations where you are moving through space, but there is also a 1/4-20 threaded hole at the end so you can mount the whole thing on a small tripod.

I like to use it like this when I go to an event because then I can walk around and film, but I could also set it up on a table and walk away just like that. Because of the blind spot between the two cameras, this stick, if it's vertical, mostly disappears when the two shots are stitched together. You could start both cameras by pushing their big, red start buttons on each camera, or you could start them simultaneously by using the remote control.

If it's not properly paired, you turn the camera back on and go through the menu to go through the whole pairing process on a different channel. This is pretty straightforward using the menus. I have to confide that one or the other of these cameras might stop responding to the remote at some point in a long shooting day, and it's necessary to go back and pair them both to a new channel on the remote, so you should familiarize yourself with that process. If they're paired correctly, they will now turn on at the same time from the remote as well. This is the on button. (camera beeps) they both turned on, and I can tell that they're ready to roll because of the green light on the side.

The range varies on this remote, but it's not very far. I wouldn't count on in working from more than a few feet away. Both cameras beep when you roll them. (camera beeps) They make that beep, beep-beep sound. You don't want to get used to that and always check for the lights to make sure they're blinking on both cameras so you know that both of them are rolling. The same goes for when you cut. (camera beeps) I could hear them kind of out of sync stopping right there.

The green light here, that means the camera is charged and ready to roll. When I roll the camera, I can see an amber light (camera beeps) blinking slowly. That means the camera is rolling. When you push the button to cut, the amber light flashes more quickly for a second, (camera beeps) and then goes back to green. Again, until you're used to those sounds and working with this camera, it's a good idea to pay close attention and make sure the cameras are really rolling and really cut when you think they are until you get used to the quirks of the lights and the beeps.

This is my setup. Rather than use Kodak's selfie stick rig, I've designed these special mounts that I've had 3D printed. They have a 1/4-20 threaded hole on the bottom so it fits on any tripod or any selfie stick and an opening here to provide access for the memory cards or the USB power ports. These holes also uncover the tiny microphones on the bottom of the camera to give you, potentially, better camera sound. With both cameras mounted, you could run two short USB cables down to an off-board battery like this one.

This battery is meant for charging cell phones and I've used zip ties and plumbing fittings to attach it here to my selfie stick. Now I can shoot much longer without worrying about my tiny batteries in these cameras dying. If you're planning on shooting extremely long takes or long scenes, you could even take the batteries completely out of these cameras to prevent overheating and get longer cables and plug them directly into AC power. You'll notice that the amber light has been blinking this whole time. That doesn't mean I'm rolling.

These cameras are turned off right now and it's just being powered by this external battery. That orange blinking light indicates that the batteries are charging. Once I turn on the camera, they both switch to green lights indicating they're ready to roll. I also like to mount the camera on a monopod sometimes like this. This is very handy for walking around. It acts sort of like a steady cam, and it also has feet on the bottom which make it very stable if I want to set up a shot and step away from the camera.

A microphone stand like this is also extremely useful if you get the right adapter for the top. My final touch is this cardboard disk. It slides between the two PixPro cameras and acts like a spacer to keep the backs of the two cameras perfectly parallel to each other. It also has this sign to indicate what I'm shooting. None of this shows up in the final video because it's in the blind spot between the two cameras. If you'd like to get one of these mounts, they're available on my website, RocketPictures.net/3D, along with a template to make your own cardboard flag like this.

All right, now that we've got it all put together, let's take a closer look at the camera settings in the next segment.