Assembling footage on the timeline 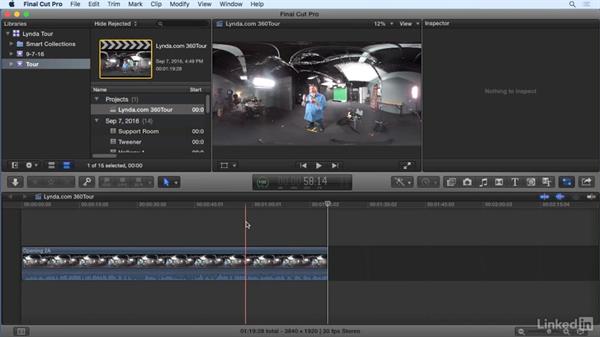 Assembling footage for 360° video can be done easily in any kind of editing suite once the clips are stitched into spherical videos. Mark demonstrates using Final Cut Pro but any editing software like Premiere can also be used to assemble and edit the 360° footage. Once you get the footage on the timeline you are one step closer to making your own 360° video.

- [Instructor] Okay, now we finished stitching…and we have a nice folder full of stitched 360 videos.…- This room is called,…lighting stand,…- [Instructor] Notice how everything blends together…and the stitches are nice and flat.…I want you to notice the shape of these videos.…They're wider than your normal 16 by nine frame.…They're not 16 by nine, they're two by one,…which in the fancy parlance of virtual reality…is equirectangular, meaning it's exactly…twice as wide as it is high, and the specific dimensions…are 3840 wide by 1920 tall,…that's an important number to remember.…

That's the dimensions of a 4k 360 video…to be used in a spherical viewer.…But now that they're flattened out like this,…Final Cut Pro or any nonlinear editor can handle them.…I'm gonna use Final Cut Pro 'cause it's what I like.…If you'd like to learn more about Final Cut Pro…there are loads of training resources…here at Lynda.com in the online training library.…You can find out anything that you want to know.…Now I'm gonna start a brand new library.…

Video: Assembling footage on the timeline