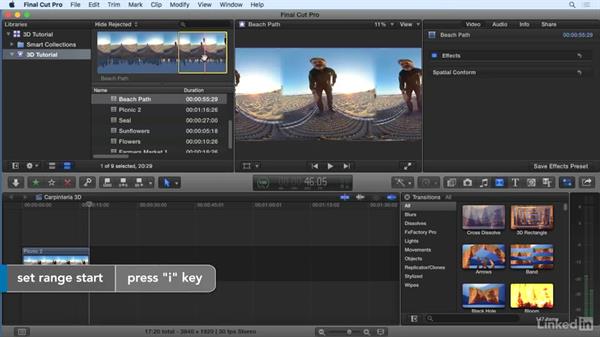 Assembling footage for 3D video can be done easily in any kind of editing suite once the clips are stitched into spherical videos. Mark demonstrates using Final Cut Pro but any editing software (like Premiere Pro) can also be used to assemble and edit the 3D footage. Once you get the footage on the timeline you are one step closer to making your own 3D video.

- [Instructor] Now we're all set to edit our 3D timeline.…The first step we want to do is make sure…it's set up properly.…So we will make a new project, just like that.…I always just do Command N,…but you can do it in the menu just as well.…And we want it to be based on the first video clip,…as usual, okay?…So we're gonna call this, um, Carpinteria 3D.…'Cause I shot this around the neighborhood of…Carpinteria, California, home of lynda.com.…

Okay, now so far this has defaulted to this size here,…but that's about to change in a moment.…So the first shot that I want to put in is…the one on the picnic table, which is this one right here.…So let's just find a place whereabout to enter, right there,…that's my end point.…I walk up into the camera, and I say something.…- All right, welcome to the 180 3D tutorial.…I hope you're enjoying this deep, deep experience…with the PIXPRO pair of cameras.…

- [Instructor] Fine, very cute.…Okay, we're gonna put that in, I've got my ins…and out point sent, then I hit the E key…to edit it right in.…